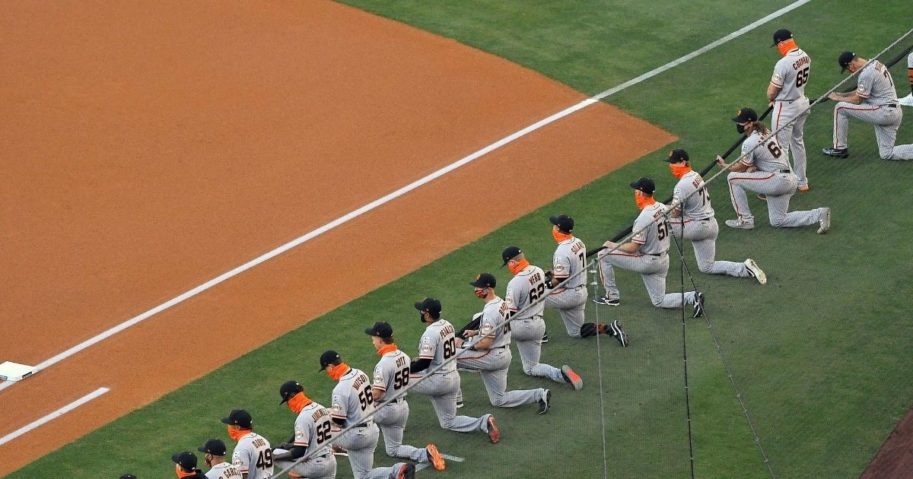 Given the current social climate, it probably came as little surprise that every MLB player from the four teams that played on Opening Day took a knee as a statement about inequality.

Well, every MLB player except for one.

San Francisco reliever Sam Coonrod was the only player among the Giants, Los Angeles Dodgers, New York Yankees and Washington Nationals who didn’t take part in the demonstration.

To be clear, the players all knelt before the playing of the national anthem. They all held a black ribbon while a recorded message from actor Morgan Freeman played. Some players stayed kneeling during the national anthem. But again, not Coonrod. And his reasoning for not partaking in the social justice festivities is as good as it got.

“I’m a Christian,” Coonrod told reporters, according to the San Francisco Chronicle. “I can’t get on board on a couple of things I’ve read about Black Lives Matter, how they lean toward Marxism and said some negative things about the nuclear family.”

He went further to explain that he meant “no ill will” by not taking a knee. “I don’t think I’m better than anybody,” Coonrod said. “I’m just a Christian. I believe I can’t kneel before anything but God, Jesus Christ. I chose not to kneel. I feel if I did kneel I’d be a hypocrite. I don’t want to be a hypocrite.”

Of course, it didn’t take long for the establishment media mob to jump on the Giants reliever as cancel culture reared its ugly head. Sports Illustrated said Coonrod “stood out like a sore thumb” and that he “hid behind his religion.” The Chronicle claimed that there might already be a “sticky situation” in the Giants clubhouse.

USA Today compared Coonrod to Republican Sen. Kelly Loeffler, co-owner of the WNBA’s Atlanta Dream, who has largely been vilified for her critical Black Lives Matter sentiments. And of course, amateur internet sleuths just had to dig into Coonrod’s past, dredging up the fact that he once wore a “Make America Great Again” hat on the Fourth of July.

While it will be fascinating to see if anyone joins Coonrod or cites similar faith-based reasons for not wanting to partake in the social justice demonstrations, the tide is certainly working against him. MLB seems insistent on committing to the Black Lives Matter movement, no matter how divisive some may find it.

While most players so far haven’t taken a knee during the national anthem, some are doing so. It’s more than a little jarring seeing a player like Dodgers outfielder Mookie Betts, a man who just signed a monstrous $380 million deal, kneeling during the anthem as a form of protest against “inequality.” It’s more jarring yet seeing MLB promote and endorse the kneeling on its official Twitter account.

Much like Dr. Anthony Fauci’s opening ceremonial pitch on Thursday, MLB might have an embarrassing miss on its hands if its social justice initiatives are going to ostracize anyone who would dare have a dissenting opinion.