According to the Jewish News Service (JNS.org), five members of the Bnei Menashe — who claim to descend from Jews banished from ancient Israel to India in the 8th century BC — were in Poland as part of a larger visiting group of Israeli students from Abir Yaakov Yeshiva High School in Nahariya.

“[Visiting Auschwitz] actually gives me a stronger feeling of love toward Israel. The Holocaust makes Israel even more important to the Jewish people,” said Yaniv Hoinge, one of the Bnei Menashe members on the trip.

The story says that Hoinge and his parents moved from India to Israel in 2012. The family’s aliyah was facilitated by Shavei Israel, a nonprofit that calls itself “the only Jewish organization today that is actively reaching out to ‘lost Jews’ in an effort to facilitate their return [to Israel].” 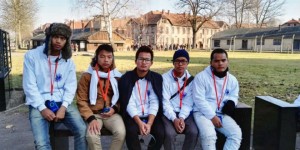 Members of the Bnei Menashe, India’s “lost tribe” of Jews, on their recent visit to the Auschwitz concentration camp in Poland.

The Bnei Menashe are said to be descendants of Manasseh, one of the 10 “lost tribes” of the ancient Kingdom of Israel.

“As part of our efforts to help the Bnei Menashe to return to the Jewish people after being cut off for 27 centuries, we view it as essential to instill them with a better understanding of the horrors of the Holocaust and its central place in Jewish history,” Shavei Israel’s founder and chairman, Michael Freund, said in a statement. An estimated 1.1 million Jews were killed at Auschwitz during the Holocaust, making it the Nazis’ deadliest concentration camp.

In 2005, then-Sephardi Chief Rabbi of Israel Shlomo Amar officially recognized the Bnei Menashe as a lost tribe, and about 1,700 Bnei Menashe members moved to Israel before the Israeli government stopped giving them visas. The government later reversed that policy, enabling Bnei Menashe immigration to resume.