By Dr. Carolyn Dean
(NaturalNews) Congestive Heart Failure (CHF) sounds so darn final. Nobody wants to fail and nobody wants their heart to fail. Merely using that terminology will dis-heart-en a person and steal their hopes for health and healing.

CHF occurs when the left ventricle heart muscle fails to pump as much blood as the body needs and pools blood in the heart. Then blood and fluid can back up into the lungs causing shortness of breath and build up fluid in the lower legs.

It’s absolutely no coincidence that the most magnesium in the body is concentrated in the left ventricle of the heart.

Why is this so important? Because CHF is considered fatal by allopathic medicine. They admit they can’t cure this condition so they’ve given up and just try to manage the symptoms with drugs. But because the cocktail of drugs they use ALL deplete magnesium, they end up just making the condition worse, which inevitably shortens people’s lives.

It’s frightening how allopathic medicine just manages this CHF train wreck and never even tries to find out what made the train go off the tracks in the first place. Simple physiology and biochemistry show us what’s really going on.

Below is an edited excerpt from my Magnesium Miracle book. It’s called The Slippery Road to Heart Attack but I’m expanding that to include Congestive Heart Failure. I’m capitalizing MAGNESIUM in this excerpt to show you how MAGNESIUM deficiency is involved with every step in this downward spiral.

STEP ONE: LOSS OF ARTERIAL ELASTICITY
The coronary arteries bringing oxygen-filled blood from inside the heart through the aorta to the heart muscle are very, very small, only about 3 mm across (a nickel is 2 mm thick). It doesn’t take much to plug them up with a tiny blood clot or to cause them to collapse when in spasm. MAGNESIUM prevents abnormal blood clot formation and prevents artery spasm.

Endothelial cells are single layers of specialized cells that form the inside membrane of an artery. The subendothelial layer (the next layer in) is a very thin connective tissue that contains elastin. This is the layer responsible for providing the elasticity in your arteries. Your body requires MAGNESIUM to maintain healthy elastin. Loss of elasticity in the coronary arteries results in inflammation of the endothelial and subendothelial layers at the points that are most mechanically challenged by stretching: the bifurcations – where blood vessels divide into two smaller branches. According to cardiologists, about 85 percent of sclerotic plaques initially form near bifurcations.

Smooth muscle cells are the next layer of the artery. Smooth muscle cells provide artery integrity and control the dilation of the arterial cavity. Calcium causes contraction and MAGNESIUM causes relaxation, which together control the blood pressure and flow in the artery. Too much calcium and not enough magnesium and the arteries go into spasm causing elevated blood pressure. A final messenger enhancing the dilation response is nitric oxide, which is dependent on MAGNESIUM.

STEP TWO: THE INFLAMMATORY RESPONSE
Inflammation begins with injury to the artery wall, leading to white blood cells and cholesterol hovering around trying to heal the damage (in a good way). At this stage in the process, if there is too much calcium and not enough MAGNESIUM in the bloodstream, excess calcium precipitates around the area of inflammation in the artery wall (leading people to erroneously think that cholesterol is the bad guy). The affected area becomes rigid and interferes with blood flow. MAGNESIUM is an exceptional anti-inflammatory mineral. Calcium is a powerful pro-inflammatory mineral.

STEP THREE: HEART ATTACK and HEART FAILURE
Over time, the above steps weaken and plug the coronary arteries and slowly destroy small areas of the heart muscle. The final result is severe chest pain, damage to a larger portion of heart muscle, heart attack and CHF.

Emory HealthCare at Emory University gives us the following statistics on CHF.

6. Heart failure is responsible for 11 million physician visits each year, and more hospitalizations than all forms of cancer combined.

8. More than half of those who develop CHF die within 5 years of diagnosis.

10. Deaths from heart failure have decreased on average by 12 percent per decade for women and men over the past fifty years.

To make up for not getting enough blood where it’s needed, your blood pressure and pulse rate will become elevated and your body will hold on to salt and water. And that’s what allopathic medicine treats people for – blood pressure and fluid retention. Patients are told they will be taking these drugs for the rest of their lives. The drug cocktail includes ACE Inhibitors, diuretics, beta-blockers and digoxin. These drugs do not cure heart failure. Instead, all of them deplete MORE MAGNESIUM.

On all the allopathic medical websites I looked at, not one mentioned magnesium as a treatment for CHF. Even though I found studies like the following.

A study published in 2005 in Clinical Calcium (Nov;15(11):123-33) said that “Congestive heart failure (CHF) is becoming more frequent worldwide. Both potassium (K) and magnesium (Mg) deficiencies are common and can be associated with risk factors and complications of heart failure (HF) … Particular attention should be paid to K and Mg restoration in CHF, because of the consequences of both deficiencies (increased arrhythmic risk, vasoconstriction), and the co-supplementation of both ions is necessary in order to achieve K repletion. Mg and K should be employed as first-line therapy in digitalis intoxication and drug-related arrhythmias, and should be considered an important adjuvant therapy in diuretic treated patients with CHF. Another possibility to restore normal K and Mg status is usage of a K, Mg sparing diuretics.”

It’s stated very plainly in this paper that magnesium and potassium should be used. But then the last sentence about using K, Mg sparing diuretics instead seems to be the message that the doctors wanted to hear. Instead of simply using K and Mg most doctors go to the diuretics. Even though those drugs also retain salt, which is an underlying trigger for the edema of CHF!

A search on one K, Mg sparing diuretic turned up 1400 other references. A search of ACE inhibitors used in CHF revealed 5288 references. I’m sure if it took the time to look up the dozens of drugs used to treat CHF I’d find about 100,000 scientific references for drug treatment for CHF. Compare that to the measly 663 references for magnesium used in CHF. You get the picture!

Yes, folks, it seems to be a losing battle. But perhaps, knowing this information about magnesium and heart disease you can take steps to saturate yourself with this important mineral and maintain the health of your heart. If you or a loved one has CHF, you can ask your doctor to look into magnesium and CHF and see the benefits.

Even alternative medicine doctors don’t understand the necessity for therapeutic amounts of magnesium as the main treatment for heart failure. Dr. Stephen Sinatra says “Congestive heart failure results from a tired, weak, energy-starved heart that is losing its ability to pump blood efficiently.” The energy molecule of every cell in the body is ATP and it is so intimately connected with magnesium it might as well be written ATP-Mg. The first step in treating a weak and tired heart is magnesium.

In an article on CHF Dr. Sinatra doesn’t even mention magnesium. His first recommendation is Coenzyme Q10. However, you need magnesium to drive CoQ10 activity. And if you eat a good diet including fish (wild salmon to avoid mercury), organ meats (like liver, heart, or kidney, from grass fed animals), and the germ portion of whole grains (organic) you have natural sources of CoQ10. I’m not saying you can’t take CoQ10, just don’t forget your magnesium. L-carnitine is another supplement touted for CHF but red meat is the best source of L-carnitine and it probably requires magnesium for its activation!

To learn about magnesium, read my best-selling book, The Magnesium Miracle in it’s Revised and Updated 2014 edition. There’s enough science in it to even impress your doctor! And go to my Resources page to see my magnesium recommendations. 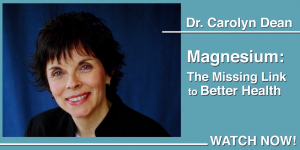 Dr. Carolyn Dean is The Doctor of the Future.

She is a medical doctor and naturopathic doctor in the forefront of the natural medicine revolution since 1979.
She is working on several patents on novel health products including RnA Drops, ReMag, ReLyte, ReNew and ReAline at RnA ReSet.

Dr. Dean is on the Medical Advisory Board of the non-profit educational site – Nutritional Magnesium Association. Her magnesium recommendations can be found under Resources on her website.