(WNS)–A majority of congregations in the Presbyterian Church (U.S.A.) have voted to approve gay marriage, a position endorsed by the General Assembly last year.

The denomination’s constitutional definition of marriage will be expanded to include a “commitment between two people.” No clergy will be required to officiate a same-sex marriage or host a ceremony on church property under the new constitutional amendment. The change will take effect June 21.

Since last year, 86 of the church’s 171 presbyteries voted to approve the redefinition of marriage, with the vote that made the majority coming in last night. But 41 rejected the change, leaving the future of their congregations uncertain. Since 2011, as the Kentucky-based PCUSA drifted away from biblical orthodoxy, 428 churches have left to join more conservative denominations, or disbanded.

But some have stayed, and they hope to reverse the trend. The Fellowship Community, a network of conservative churches that want to uphold the biblical definition of marriage, will “remain faithfully engaged in conversation,” said the Rev. Paul Detterman, its national director. 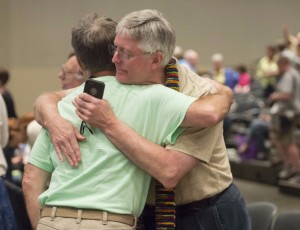 The PCUSA now has about 10,000 congregations and 1.8 million members, making it the largest Protestant denomination to fully embrace same-sex marriage. Church officials urged “mutual forbearance” amid disagreements about the decision. “We hope that such ‘up/down’ voting does not mark the end, but the continuation of our desire to live in community,” they said in a statement issued Tuesday night.

The United Church of Christ was the first major Protestant denomination to approve same-sex marriage, in 2005. The Episcopal Church does not have a formal position on gay marriage but allows bishops to determine whether priests can officiate same-sex ceremonies on a case-by-case basis. They will consider the issue again in June.

The Evangelical Lutheran Church in America has a similar policy, with some congregations allowing gay marriage and ordaining gay clergy although the denomination doesn’t officially endorse it. And the United Methodist Church prohibits gay marriage and “self-avowed practicing homosexuals” from ordination. But many clergy have flouted that policy, conducting same-sex weddings and openly challenging church leaders in protest.