WASHINGTON—As many as 3,000 supporters of traditional marriage convened on the National Mall on April 25th, three days before the U.S. Supreme Court heard oral arguments in a set of cases that will determine whether same-sex marriage will be legal in all 50 states.

Organized by the National Organization for Marriage (NOM), the third annual “March for Marriage” rallied public support in favor of keeping marriage defined as strictly between one man and one woman. Compared to last year’s rally in June, which drew up to 10,000 people by some estimates, this year’s event did not appear to generate nearly as much enthusiasm. That may be due in part to the likelihood the Supreme Court will rule in favor of same-sex marriage. 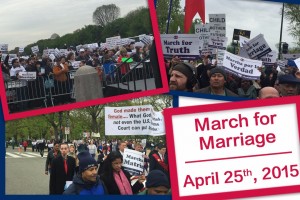 Sixteen speakers, most representing church and religious organizations, nevertheless remained upbeat and appealed to the crowd’s faith and desire to uphold traditional marriage for the sake of the nation’s children. Some admitted the high court probably wouldn’t rule in their favor but vowed to remain vocal, with one comparing the fight for traditional marriage to the fight to overturn the Roe v. Wade decision that legalized abortion.

We see you’ve been enjoying the content on our exclusive member website. Ready to get unlimited access to all of WORLD’s member content?
Get your risk-free, 30-Day FREE Trial Membership right now.
(Don’t worry. It only takes a sec—and you don’t have to give us payment information right now.)

“Render to Caesar what is Caesar’s and to God what is God’s. This is a sacred trust bequeathed to us, and we must protect it,” said Rev. Father Johannes Jacobse, founder of the American Orthodox Institute and pastor of St. Peter Orthodox Church in Bonita Springs, Fla.

No court has the right to change the meaning of marriage, said Tom Minnery, president and CEO of Citizenlink.

Mark Kirby, who came to the march with a friend from his local church in Baltimore, Md., was more blunt in his pessimism.

“I think our society is committing suicide,” he said. “I’m not sure how you can combat it. I think it’s a real problem.” 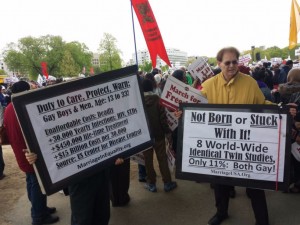 The crowd this year was overwhelmingly Hispanic, so much so that Spanish translation was provided for almost all of the speeches. Supporters said the large number of Hispanic supporters came on buses from New York City, and specifically the South Bronx district represented by New York State Sen. Ruben Diaz, a Democrat and an outspoken opponent of same-sex marriage. Others noted the Hispanic population’s penchant for social conservatism and being vocal about issues concerning faith and family.

A handful of people mounted a quiet counter-protest, holding large rainbow flags and signs with rainbow hearts at the foot of the Supreme Court steps. They said they were demonstrating because they believed traditional marriage supporters were pushing an agenda to legislate hate.

“I feel like the message of inclusion and tolerance and love needs to be heard,” said Washington resident Matthew Swanson as he held a rainbow sign in front of an American flag painted in rainbow colors. “I don’t want to change anyone’s mind. I just want my voice to be heard.” He said his singing group, the Gay Men’s Chorus of Washington, would perform in the same spot on Tuesday.

Coinciding with the rally, the National City Christian Church scheduled a “United for Marriage” interfaith prayer service to bring together religious supporters for same-sex marriage. Organizers from the group Freedom to Marry also designated this weekend as “National Weekend of Prayer for the Freedom to Marry,” and have called on nearly 300 religious congregations from across the country to “pray that the values of love and the Golden Rule prevail over fear and discrimination.”