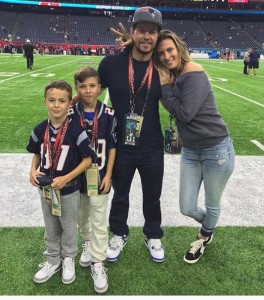 It’s not often you see a major Hollywood actor with active faith and a life of integrity. Sure, we hear actors thanking God during an awards ceremony, but you don’t always see their faith backed up with their lifestyle.

That’s what makes actor Mark Wahlberg so refreshing. Known as a bad boy in his youth (in fact, he become a Christian in jail!), Wahlberg is now a devoted family man who seeks to lead his family spiritually.

“I’ve had the ability to focus on me and my career for quite some time, and of course, I want to be successful,” Wahlberg shared in an interview with the Christian Post. “But the biggest challenge is to be the most successful husband and father I can be and use the talents and gifts that God’s given me to help others and do with it what He’s chosen.”

One way Walhberg does that is through going to church daily and praying for 30 minutes when he first gets up. “These are the things I need to keep focused on,” he confided. “My kids will be like, ‘Dad, you don’t need to go to church all the time; you’re praying every day.’ And I do, and hopefully, that will rub off on them.”

Wahlberg, who has “Instant Family” coming out soon, shares how he stays positive and devout in such a negative industry. “If you’re paying attention to the negative stuff, that’s going to be what influences you,” Wahlberg explained. “It’s about where you’re existing on a daily basis. I don’t surround myself with negative people; I’m around a lot of really positive people who strive to be their best and are quick to lend a hand to help somebody and have encouraging words for people.”

“You need to constantly be putting yourself in positive places and around positive people,” he added. “If you’re watching people partying, dancing, and doing all that stuff, that’s what you’re going to gravitate toward.”

Though Wahlberg tries his best with his family, he admits that he makes mistakes: “Sometimes, I’ll think back over things that happened over the course of the last few months, and I’ll pray, ‘God, I wish I would’ve done that differently,'” he revealed. “But you’re kind of going through it for the first time. I’ve got a 15-year-old. I’ve never had a 15-year-old. She’s throwing me every monkey wrench possible. But as long as you’re trying to improve and get better and your intentions are good, it’s very normal to make mistakes.”