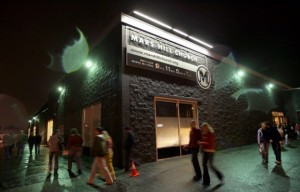 (WNS)–Mars Hill Church, which as recently as January had more than 14,000 people attending Sunday morning worship services, will cease to exist organizationally by the end of the year.

In a letter to the congregation that’s posted on the Seattle-based megachurch’s website, teaching pastor Dave Bruskas says the multi-site church organization will dissolve by Jan. 1, 2015, though some of the sites that are viable as local congregations will continue to operate. But several of these locations have already shut down, and others are likely to do so in the months ahead.

“All of Mars Hill’s existing church properties will either be sold, or the loans on the individual properties will be assumed by the independent churches, subject to approval by the lender,” Bruskas writes. “All central staff will be compensated for their work, and then released from their employment [and] the existing Mars Hill Church organization will be dissolved. … If any funds remain after the winding down and satisfaction of Mars Hill business affairs, they will be gifted as seed money to the newly independent churches.”

Bruskas goes on to ask for prayer for the pastors and elders at the various local congregations, as they assess their options, which include becoming an independent, self-governing church; merging with another existing church in their area; or disbanding while helping members find other church homes.

“Mars Hill Church has never been about a building or even an organization,” he writes. “Mars Hill is a people on a mission with Jesus, and that singular focus continues as these newly independent churches are launched.”

Bruskas’ letter culminates a year of turmoil and decline at Mars Hill Church that began in October 2013 when Janet Mefferd confronted Mars Hill co-founder Mark Driscoll about charges of plagiarism in his books. That interview on her nationally syndicated radio talk show set off a chain reaction of events that included an investigation by WORLD revealing that Driscoll had used more than $210,000 in church funds to promote one of his books. In the midst of the turmoil, Driscoll took a leave of absence from the church in August and resigned last month.

Many former leaders at Mars Hill say troubles began in the church as far back as 2007, when the church re-organized to centralize church governance power in the hands of Driscoll and a few of his close allies. Two men who were pastors at Mars Hill at that time, Paul Petry and Bent Meyer, protested the changes. The church ultimately fired them and took the unusual step of asking church members to shun the two men.

This weekend, most of the elders who made the original decision to discipline Petry and Meyer in that manner repented of their actions and apologized.

“We want to publicly confess our sin against you regarding events that took place at Mars Hill Church back in 2007,” states a “Letter of Confession to Bent Meyer and Paul Petry” signed by 18 former Mars Hill elders and pastors. “We were wrong. We harmed you. You have lived with the pain of that for many years. As some of us have come to each of you privately, you have extended grace and forgiveness, and for that we thank you. Because our sin against you happened in a public way and with public consequences, we want to make our confession public as well with this letter.”

The letter continued, “We stood by as it happened, and that was wrong. … [We] put doubt about your character in the minds of church members, though you had done nothing to warrant such embarrassment and scrutiny. By doing this, we misled the whole church, harmed your reputation, and damaged the unity of the body of Christ.”

As those who remain at Mars Hill Church absorb the latest news, they will do so without the leadership of the senior pastor of the church’s largest congregation. During yesterday’s 10:30 a.m. service at Mars Hill’s Bellevue, Wash., location, lead pastor Thomas Hurst announced his resignation, saying he wanted “to take a break” from ministry.