Megachurch Pastor Swings the Sword of the Spirit in Transgender Debate 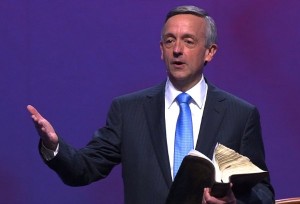 Robert Jeffress probably doesn’t cast out devils, but he is doing a fine job swinging the sword of the Spirit as the debate about genderless restrooms in public spaces rages.

Jeffress, pastor of First Baptist Church in Dallas, Texas, took the battle to the pulpit, equipping the saints with the truth so they can respond rightly amid the LGBT lobby’s lies.

“It’s not that confusing. In Matthew 19:4, God’s Words are applicable. The Bible says ‘God made them from the beginning male and female.’ Not male, female and question mark. God has determined how many sexes there are—there are two, not three,” Jeffress said.

Check out the full video sermon and sound off.