Mere Tolerance Will Not Be Tolerated!

The left today is identity politics. That’s it. That’s all they’ve got. 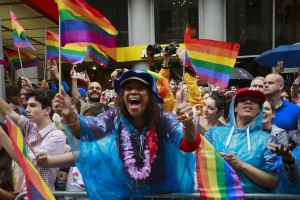 Remember in the good old days of the civil rights and gay rights movements when black, Hispanic and gay people said they just wanted to be treated like everybody else? I miss those days.

The word “tolerance” used to mean simply “the ability or willingness to tolerate something, in particular the existence of opinions or behavior with which one does not necessarily agree.” People have varying opinions, beliefs, and backgrounds — you know, actual diversity.

This definition does not comport with today’s left. These rabid liberals — the cockroaches who are seemingly in every nook, cranny and underbelly of society — have changed the definition of “tolerance” to “YOU MUST ACCEPT AND CELEBRATE.” They are Lucy with the football, and we are all Charlie Brown.

During the civil rights movement of the 1960s, America eliminated Democrat-initiated practices like Jim Crow laws, segregation and the doctrine of separate but equal.

In their places, however, we put in some new, more touchy-feely discrimination in the form of affirmative action. It was said that because of evil white America, black people had no ability to compete, so standards should be lowered to accommodate them. And today, the left has become so insane they have reverted to wanting segregated dorms, segregated graduation ceremonies and university classes taught about how white people are the devil.

When it comes to homosexuality, most people have a live-and-let-live attitude; nobody really cares what you do in the privacy of your bedroom. But now that isn’t enough. After gay marriage was made the law of the land by nine people in black robes, I waited with bated breath for the other shoe to drop.

What would be the next lifestyle change the left was going to foist upon us? I mean, they got the Holy Grail of gay marriage (rejection of which because of deeply-held religious beliefs made you a hateful bigot) so what else could they possibly complain about? You see, with the left, there is no permanent goalpost. Things are always flexible.

It didn’t take long until leftists started toying with science. Ironic, isn’t it, that the left always accuses conservatives of ignoring “settled science” when it comes to the hoax of man-made climate change, but all of sudden gender is a CHOICE?

Today there is no such thing as being a “typical” boy or girl. No! That is part of the conservative, White Devil, patriarchal, white-privilege culture! Gender is as much a lifestyle choice as bestiality or plural marriage! And by God, you better get with the program, America.

Unfortunately for the left, unless human beings (who still must reproduce, I’m told) suddenly start looking like little gray aliens with no discernible genitals, we’ll still have boys and girls.

Boys and girls are wired inherently differently.  I’m not discounting that there is a very small percentage of the population who genuinely feel they are something other than the gender under which they were born. But this is NOT the “new normal” — as the left is trying to force us to believe.

Additionally, mere tolerance of homosexuality is no longer acceptable. You must conform to the LGBTQXYZ standards the left has set forth, which are to embrace, celebrate and elevate all gays, lesbians, queer, transgender, non-binary, non-gender or whatever other load of crap the left is pushing.

We MUST turn the stall or urinal where one relieves oneself into a political battle. We MUST have an entire month dedicated to their extra-special lifestyles and the choices they make about who to have sex with or whether or not to wear guy makeup. We MUST force companies to forgo traditional, gender-specific advertising for children’s toys.

We MUST talk about how white privilege is ruining Amerikkka and how black people, minorities, differently-abled, women and LBGTQXYZ folks need special treatment because they can’t compete in a male, patriarchal, white-privilege society. We MUST accept racial terrorist groups like Black Lives Matter who openly call for the murder of police officers (bonus points for white police officers).

Ah, yes. “Traditional America.” That phrase is a particularly gnawing wolf whistle for leftists. They automatically associate “traditional America” with slave-owning Founding Fathers, cops killing unarmed black men or spraying protesters with fire hoses, and white conservative men meeting in secret cabals to mastermind how to keep a brother (or sister, or Hispanic, or LGBTXYX) down.

The left today is identity politics. That’s it. That’s all they’ve got. They think if they complain, gripe, moan and whine while continuing to divide people into subsets, they are winning. The only place they are winning is on college campuses, with 90 percent of the “news” media and in Hollywood — three rarefied, sissified places which are removed from and devoid of reality.

The left continues its primal scream about the 2016 election and still can’t grasp how Trump won. Normal Americans, by contrast, understand why he did. Normal Americans want to see substantial and tangible changes in America, and those changes have nothing to do with identity politics.

We want a border wall built. We want to vet who comes into this country. We want tax reform. We want Obamacare repealed and destroyed. We want the free market to reign. The free market doesn’t care if you are a transgender Hispanic immigrant.

Until tolerance goes back to being a concept that means actual tolerance and not forced acceptance, the left will continue to browbeat everyone with its craziness.

There’s a part of me that wants them to continue down this path, because it’s funny, and I love funny things. But unfortunately they are changing the culture inexorably — to where a white, straight, Christian, conservative male is considered the ultimate enemy. This is insane. A white straight male can no more choose to be born a different color or sexuality than a gay Asian female can.

All the left has is the ability to divide us. Conservatives want to unite Americans under common goals and common values. We won’t all agree on the competing ideas of homosexuality being a choice or something formed in utero.

There are a multitude of issues on which we can agree.

Deep down, the left understands this. They understand that finding ideas to unite people is a much more dangerous proposition for them, because their ideas don’t work. Their ideas have never worked. Look at Cuba, Venezuela, North Korea, the U.S.S.R. and anywhere their socialist/communist ideas have run amok: communist pure hell.

The ONLY thing the left can do is to seek to divide Americans on the basis of identity politics.

And that is something I will not tolerate.

Angela Box is a former teacher, devoted to the Constitution and conservatism and proud to live in Texas. A version of this article originally appeared on her blog, angelassoapbox.com.