(WNS)–United Methodist Church officials who vet requests to sponsor display tables at the UMC May 2016 General Conference in Portland, Ore., have rejected Discovery Institute’s application despite its compliance with denomination guidelines.

“It seems to me that you are applying your vetting standard simply to exclude an idea you apparently dislike, not to fairly apply the standards you espouse,” John West, Discovery Institute’s vice president, wrote in a letter to the UMC.

West notes the irony that a denomination with the slogan “Open Hearts, Open Minds, Open Doors” would reject Discovery’s application solely on the basis that it supports intelligent design. The denomination’s slogan should be “Closed Hearts, Closed Minds, Closed Doors,” he said. 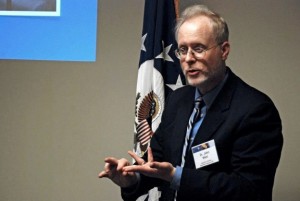 Michael Flannery, a university professor and Discovery Institute fellow, said he was “disheartened and appalled” that officials representing his denomination would try to stop discussion before it starts.

“[They] certainly don’t speak for me or for many other United Methodists in the pews,” Flannery said.

After Discovery applied to become an exhibitor at the conference, UMC official Bobby Smith phoned to say the application had been rejected because of a 2008 resolution “opposing the introduction of any faith-based theories such as creationism or intelligent design into the science curriculum of our public schools.” Seeking reconsideration, Discovery representatives pointed out its policy also opposes teaching intelligent design in the public schools, and that the theory, as articulated by scholars affiliated with the institute, is not faith-based, though it has positive implications for faith.

Smith’s response reinforced the original decision with no explanation of the rationale applied by UMC officials. On further appeal, Judi Kenaston, chair of the commission on the general conference, denied Discovery’s request, adding that conference exhibits “are not to provide a platform to survey or test ideas; rather, to provide products/services/resources which are credible and proven” in church ministries.

Discovery Institute produces books, videos, and educational materials, and sponsors science and faith conferences in the United States and abroad that draw Christians of many stripes, including Methodists. It has no plans to survey or test ideas, West said.

UMC officials have not responded to WORLD’s request to explain why they rejected Discovery’s application.

Discovery Institute has set up an online resource for those who want to contact United Methodist leaders, urging them to “live up to their church’s slogan and be truly open-minded,” West said.