DEARBORN, Mich. (BP) — Southern Baptist pastor Carlos Liese recalls entering a mosque near Dearborn, Mich., sitting on the floor with Islamists and sharing the Gospel. An elderly Muslim man who said little during the conversation invited Liese to his home.

“And they had just told us we were going to hell, and we had gently told them that they were going to hell too, in a gracious way,” Liese told Baptist Press. “But we stood our ground. We shared the Gospel and it was well received again, even though we ended up not agreeing.”

Southern Baptist pastors say rumors of Dearborn, Mich., which has a high concentration of Arab Americans, being under the control of Sharia law have hampered evangelistic outreach there. Dearborn Mayor Jack O’Reilly has refuted the claim, helping to remind the public that Dearborn is a democracy governed by a mayor and seven-member city council elected by a vote of the public.

Such encounters are not uncommon for Liese, who helps lead monthly evangelism efforts in Middle Eastern coffee shops, hookah bars and restaurants in Dearborn, a city where at least a third of the population is Arab-American, according to U.S. Census Bureau’s 2000 report, “Arab Population in Selected Places,” and 2009 numbers from the Arab American Institute. Many concede the U.S. Census undercounts Arab-Americans. And to improve its count, the Census Bureau is considering adding a “Middle Eastern/North African” category to its racial and ethnic background question in the 2020 survey, the Arab American Institute reported in November 2014.

Contrary to news reports dating to as early as 2010, Dearborn is not under Sharia law, a strict — and sometimes tortuous — theocratic form of civil and criminal law based on the Quran, Southern Baptist pastors in the Detroit suburb of about 100,000 say.

Liese, who lives in Dearborn Heights and pastored First Spanish Baptist Church in Detroit for 22 years, called such reports “yellow journalism,” aimed at riling people and increasing readers and viewers.

“And making statements like that only frighten people and that doesn’t accomplish anything,” said Liese, who today pastors Good Shepherd Baptist Church in Lansing, 60 miles away.

While Sharia varies in implementation in Islamic countries that impose it, common Sharia punishments, according to the Duhaime.org online law dictionary, include prison or death for criticizing the government, which is considered blasphemy; death by stoning for a woman who has a child out of wedlock, even in cases of rape; and jailing or caning for vagrancy, the crime of being intentionally unemployed and failing to care for one’s family. 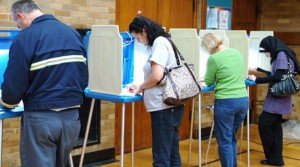 Regardless of rumors, 37 percent of Christians fear the establishment of Sharia law in the U.S., according to a September–October, 2014 poll by LifeWay Research, Baptist Press reported Feb. 11.

The rumors are so well established, Dearborn Mayor Jack O’Reilly has refuted the claim in letters to individuals, appearances on international media and in an Oct. 30, 2013 press release stating emphatically, “Dearborn is not under sharia law and has never at any time even considered such an action…. One unique aspect of our community is the strong working relationship that exists among our diverse faith leaders, who foster understanding and tolerance.”

Through an outgrowth of the Greater Detroit Baptist Association, Liese has partnered since 2012 with Dave Ferraro, pastor of discipleship at Merriman Road Baptist Church in Garden City, Mich., to spread the Gospel among Muslims in Dearborn. The two are regularly well received among Muslims, Liese said, and have even sung Christmas carols to the applause of Muslims gathered at Middle Eastern restaurants where the two frequently dine.

“We set out in hopes of putting together a coalition of like-minded Southern Baptists, Michigan Southern Baptists, who have a passion to reach Muslims for Christ,” Liese said. “We’ve not seen anybody added to the church, but we’ve done a lot of seed planting and people have been very, very receptive. Our experience has been nothing but positive.

“People have always been gracious,” Liese said. “In all these years that we have been doing this we have been able to share the Gospel with many people, so many seeds have been sown, and we have never been mistreated or disrespected, ever.” The two men have been invited to the homes and family events of Muslims, including weddings, and Muslims have visited the homes and churches of Southern Baptists.

“We are barely hanging on as a denomination in the state,” Garza told Baptist Press. “Dearborn is a largely unreached city; there’s lots to do here. But not only Dearborn, but I would say our suburbs as well, even though they’re populated by a large number of Anglo-Americans, they are not evangelical.”

Rumors of Sharia law in Dearborn only hamper outreach efforts, said Garza, who strives to build relationships with Muslim neighbors and imam leaders of mosques.

Garza strives to be a Christian witness among the diversity of Muslims in his immediate neighborhood, shoveling show and performing other acts of kindness. His next-door neighbor, a Muslim, commends him, Garza said.

“I go out of my way to shovel the sidewalk for them. I’m going to show my respect for them by helping them out,” Garza said. “We’re making headway.”

“But let our good works open doors; obviously good works do not present the Gospel, but [good works] demonstrates to them that if we say we are followers of … the Messiah, then we’d better behave like it,” Garza said. “[Good works say] even if we just disagree with them in our faith, we’re going to love them anyway.”

“Dearborn is full of a community that likes to go to Walmart to shop, loves to eat, wants to educate their kids in their values, and a lot of their values are good. It’s not full of a bunch of jihadis who want Sharia law,” Vroman told Baptist Press. “In general, people just want to live there. That’s the thing that people don’t get, that at the end of the day they are people…. They just want to make a living, and they’re worried about their kids [and] families.”

However, Muslims do want to rear their families with Muslim values, and whether the public images of Muslims in Dearborn mirror their private lives can only be left to speculation, Vroman said.

“The leaders, not jihadists, they do want to be able to marry, and bury and divorce and live according to the rules of Islam, and that’s true,” Vroman said. “They do want their people to live according to Islam…. They do want dialogue because they believe in what they hold to. The other thing they want to show is that … there’s a peaceful side to the Muslim culture…. So many Muslims really want their voice to be heard because they’re tired of [it] being said, ‘You’re a terrorist, you’re a terrorist, you’re a terrorist. Everybody looks at you funny.’ Talk about profiling.”

Among Muslim leaders, Imam Mohammad Ali Elahi of Islamic House of Wisdom in Dearborn has spoken frequently and publicly against ISIS and terrorism.

“It’s a big lie to call yourselves Islamic State,” Elahi said of ISIS at an August 2014 anti-terrorism rally in Dearborn. “You are not Islamic and you are not a state. You are a bunch of gangsters and criminals who choose the tools of torture, intimidation, explosion, theft and disruption against innocent people.”

Elahi promotes Islam as a religion of peace.

“And any mentality and any kind of teachings that are against human common sense, against peace, against rationality, against respect for human life and human property and human intellect, and human integrity, it is against Islam,” he said. “And this is why we consider these guys … real enemies of Islam. But unfortunately we don’t receive the support from the world in our fight against terrorism. We need to provide more awareness and education to the families themselves.”

Vroman said Southern Baptists who allow fear to inhibit their outreach to Muslims are living in disobedience to the Great Commandment and the Great Commission.

“I think we need to repent of our walking in fear and not caring about the souls of Muslims, and I think as Baptists we need to get intentional about showing love to Muslims so we can reach them,” Vroman said. “We need to believe what the Bible says and not talk radio. I wish that Christians would befriend Muslims, because they’re not the enemy, but we act like they are.

“Are we an American first or a disciple of Jesus first?” Vroman asked.

Southern Baptists need to pray for evangelistic outreach in Dearborn, pastors told Baptist Press, and should consider funding or physically participating in long-term outreach to the community. Many have moved to Dearborn and lived among Muslims to reach them for Christ, Liese said.

Muslims and Christians are united by our sin problem and need for a Savior, Liese said.

“The same place that all religions lead to is an attempt to deal with our sin problem; all of us deal with that,” he said. “The only difference is we have a Savior who is the Son of God who came, was born of a virgin, lived a sinless life, died on the cross as our substitute, rose from the dead bodily, and ascended and is at the right hand of God. And we don’t back down on any of that. We believe that. That’s Who we worship. That’s our Savior Lord Jesus.”

Liese often asks Muslims how their religion absolves them of sin, and finds they often can’t identify a particular point at which their sins are forgiven.

“They say, ‘We fast at Ramadan and we pray [five] times a day and we give to charity,'” Liese said. “They’ll say, ‘If I’m lucky I might be good enough.’ And they’ve used that word [lucky] several times with me. And so I’ll say, well, that right there is the great difference, not that I’m any better than you, but I have a Savior, and this is what I believe.

“Eventually we get to share the Gospel, and that’s what we do.”