Military Spokesman on Taliban Pakistani School Massacre: “Their Sole Purpose Was to Kill Those Kids”

Pakistani soldiers repelled the attack, but not before the attackers massacred 132 children and nine staff members, CBN said on its website www.cbn.com. “Their sole purpose, it seems, was to kill those innocent kids. That’s what they did,” military spokesman Asim Bajwa said.

CBN News reported that authorities say most of the victims were students in grades 1-10 at the army public school. 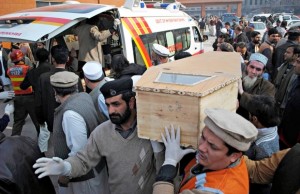 “My son was in uniform in the morning. He is in a casket now,” Fox News quoted Tahir Ali, who arrived at the hospital to claim the body of his 14-year-old son Abdullah. “My son was my dream. My dream has been killed.”

CBN News explained that Tuesday’s attack is the worst in Pakistan in over a year. Taliban spokesman Mohammed Khurasani claimed responsibility for the massacre, saying that six suicide bombers initiated it in revenge for Taliban members killed by Pakstani authorities. His organization, Tehreek-e-Taliban, is a Pakistani military group working to overthrow the government.

CBN News said the jihadists entered the school Tuesday morning and began shooting at random until army commandos arrived at the scene. The school is located at the edge of military quarters in Peshawar, but most of the students are civilian.

Local hospitals have been treating dozens of the injured. CBN News went on to state that Peshawar has endured frequent terror attacks in the past but recently had enjoyed a relative lull.

Please pray for these families who have lost precious children, and for those wounded in this atrocity.