Millennial Writes a Parent’s Guide to the Evangelical Left 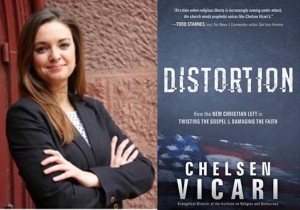 (WNS)–What does “evangelical” mean in 2014? The rise of the so-called evangelical left—a movement catching on with many younger Christians—has blurred the picture. Chelsen Vicari says the evangelical left is twisting the gospel. She is the author of a book released this week, published by Frontline. The title is Distortion: How the New Christian Left is Twisting the Gospel and Damaging the Faith. I spoke with Vicari, who serves in Washington, D.C., as the director of evangelical action for The Institute on Religion and Democracy.

Let’s address the doctrinal question first. Do people on the evangelical left still believe in sin and salvation, in the work of Christ, in the resurrection, in those touchstones of the faith? I’m sure many of them do. When I say “the evangelical left,” I’m really talking about those within the church who are pushing a political, leftist agenda cloaked in Christianity. And when I say “cloaked in Christianity,” I mean using the Bible and twisting it to justify a leftist political agenda that actually goes against what Scripture talks about in many ways, for example, marriage, and life, and liberty.

How much does the issue of homosexuality have to do with the evangelical left? It is arguably the biggest, most hostile issue millennial Christians are faced with. Whenever we talk about same-sex relationships, we are either labeled as bigoted or uncompassionate, or we’re dismissed if we hold a view of marriage that is between one man and one woman. As a Sunday school teacher, I see it first hand. I have kids who are really smart, really outgoing, who will talk about any awkward or complex issue. They’re just eager to learn. But whenever I talk about the same-sex issue, they clam up. They get incredibly quiet because at school or in public they are being taught to either agree or to be quiet. So this is an issue that we’ve got to start talking about. We cannot give in when it comes to the same-sex issue, which is what millennials are struggling with. That is probably the biggest issue that they are faced with whenever they talk about their faith.

Now, you are a twenty-something, but this book is not written to millennials and teenagers but to older folks. Why? I wrote it to my parents, in many ways. When I was fighting with my parents about reconciling unorthodox teaching with the Bible, they didn’t understand the authors I was reading or the speakers who were having a big influence on me. All they knew was that I was going to this Christian campus and coming back with untruths. I write to the grown-ups in the room so that you can understand who’s influencing your millennials, what’s being taught, and how you can address it.

The final section of your book is titled “Preventing the collapse.” It sounds like you think there is hope for shoring up what seems to be an increasingly shaky situation. I absolutely believe that we can have revival, not just in the evangelical community but the church at large. But to do that, it’s going to start within our homes. It’s going to start by teaching our children exactly what Scripture says and how to defend it. Oftentimes the millennials are willing to compromise because, honestly, they don’t know enough about their faith to speak up about it. That’s what happened to me. So, first, we have to start teaching in our homes and living out our faith. We have to pray for revival, and we have to pray for courage to be able to speak up on behalf of Christ.