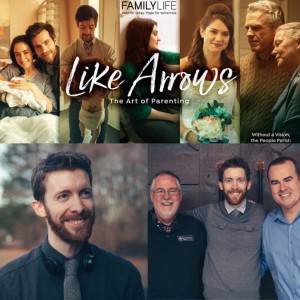 Bob Lepine is the co-host of the daily radio program FamilyLife Today, heard in two hundred markets across the United States. Since joining FamilyLife in 1992, Lepine has applied the lessons he learned in mainstream and Christian radio to his many responsibilities within the FamilyLife umbrella. A regular speaker at FamilyLife Marriage Conferences and a bi-vocational pastor at Redeemer Community Church, he and his wife, Mary Ann, have five adult children and five grandkids to influence his considerable experience working to build strong marriages and families. As FamilyLife moves toward its first theatrical release, its influence continues to grow exponentially.

Best known for its “Weekend to Remember” events for couples, FamilyLife reaches sixty thousand people a year in cities around the country. But recognizing that the scalability of reaching more people with their curriculum wasn’t organic through the events, the organization chose to explore a way to put its presentation into a video curriculum. Turning aside from a straight “documentary” style of recording the actual events, FamilyLife created a six-session event of thirty to forty-five minute segments.

“We aimed for Sesame Street meets Saturday Night Live meets our content,” Lepine explained. “Short digestible bits of teaching with vignettes that were humor-filled. So we created the first study, Art of Marriage, in 2011.”

Following the series aimed at helping participants develop godly marriages and families, FamilyLife created Stepping Up, a series for men that carried the same approach to a short-term video series. Then, in 2016, the team set out to do a series on parenting, deciding on an ongoing story about a couple on their parenting journey.

“We wanted to use story to speak to the heart and not just the head,” Lepine said. “We wanted parents to see themselves in the storyline and go, ‘yeah, we’ve had that challenge with our kids or we’ve had that fight before.’ I saw Boyhood and i knew we didn’t have 10 years to make the movie, but we dropped into the life of a child over ten years.”

Calling on his friends Alex and Stephen Kendrick, Lepine asked them for their guidance in making a feature-length story. The Kendricks consistently mentor the next generation of filmmakers, and recommended Kevin Peeples to tell this parenting journey over six chapters.

After working through the vision and script in Albany, GA, last August, Peeples took the script and began to film what was necessary for the six-session study. “The Kendricks wisely said, ‘Do what you need to do and film it,’” Lepine shared. “They encouraged us to see what it looked like in the end and then decide about a feature-length version.”

After shooting in January and editing in May, the FamilyLife team showed the feature-length version to the cast and crew in a theater. The responses helped them realize that they had a Fathom event they could share in theaters. Called Like Arrows, the film displays the considerable skills of actors like Alan Powell, Micah Lynn Hanson, and even Alex Kendrick, with a host of first-time actors (like the director’s kids) incorporated as well.

So far, Lepine said the response has been powerful as audiences have identified the threads FamilyLife hoped they would pick up. “They see that parenting can’t be casual but must be intentional, and that it’s never too late to do what’s right in parenting,” he said. “If we aren’t purposeful and intentional with the end in mind, we’re not going to accomplish what God wants for our kids. But there are also times we look and say, ‘It’s too late to do anything about that,’ but even when the kids are grown and on their own, parents can still have the impact in their children’s lives.”

Thanks to FamilyLife, families don’t have to work these things out on their own.