Missionary died thinking he was a failure; 84 years later thriving churches found hidden in the jungle

In 1912, medical missionary Dr. William Leslie went to live and minister to tribal people in a remote corner of the Democratic Republic of the Congo. After 17 years he returned to the U.S. a discouraged man – believing he failed to make an impact for Christ. He died nine years after his return.

But in 2010, a team led by Eric Ramsey with Tom Cox World Ministries made a shocking and sensational discovery. They found a network of reproducing churches hidden like glittering diamonds in the dense jungle across the Kwilu River from Vanga, where Dr. Leslie was stationed.

With the help of a Mission Aviation Fellowship pilot, Ramsey and his team flew east from Kinshasa to Vanga, a two and a half hour flight in a Cessna Caravan. After they reached Vanga, they hiked a mile to the Kwilu River and used dugout canoes to cross the half-mile-wide expanse. Then they hiked with backpacks another 10 miles into the jungle before they reached the first village of the Yansi people.

Based on his previous research, Ramsey thought the Yansi in this remote area might have some exposure to the name of Jesus, but no real understanding of who He is. They were unprepared for their remarkable find.

“When we got in there, we found a network of reproducing churches throughout the jungle,” Ramsey reports. “Each village had its own gospel choir, although they wouldn’t call it that,” he notes. “They wrote their own songs and would have sing-offs from village to village.”

They found a church in each of the eight villages they visited scattered across 34 miles. Ramsey and his team even found a 1000-seat stone “cathedral” in one of the villages. He learned that this church got so crowded in the 1980s – with many walking miles to attend — that a church planting movement began in the surrounding villages.

“There is no Bible in the Yansi language,” Ramsey says. “They used a French Bible, so those who taught had to be fluent in French.”

Apparently, Dr. Leslie crossed the Kwilu River once a year from Vanga and spent a month traveling through the jungle, carried by servants in a sedan chair.

“He would teach the Bible, taught the tribal children how to read and write, talked about the importance of education, and told Bible stories,” Ramsey notes. Dr. Leslie started the first organized educational system in these villages, Ramsey learned. 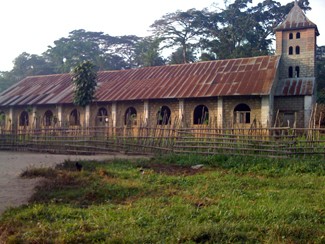 It took some digging for Ramsey to uncover Leslie’s identity. “The tribal people only knew him by one name and I didn’t know if that was a first or last name. They knew he was a Baptist and he was based in that one city and they knew the years.”

Born in Ontario, Canada, William H. Leslie followed his intended profession as a pharmacist until his conversion in 1888. He moved to the Chicago area, where God began to grip his heart with the desire to become a medical missionary.

Dr. Leslie initiated his Congo service in 1893 at Banza-Manteke. Two years later he developed a serious illness. A young missionary named Clara Hill took care of him until he recovered. Their budding friendship ripened into love and a marriage proposal. They were wed in 1896.

In 1905 William and Clara pioneered a work in Cuilo, Angola, where they overcame a hurricane that struck the night before one of their children was born, and more mundane obstacles like charging buffaloes and armies of ants. 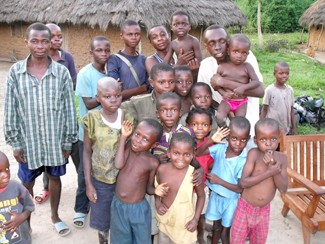 Seven years later they cleared enough of the leopard-infested jungle along the Kwilu River at Vanga for a new mission station perched on a small plateau. Some of the villages surrounding Vanga were still practicing cannibalism at that time.

They spent 17 years at Vanga, but their service ended on a rocky note. “Dr. Leslie had a relational falling out with some of the tribal leaders and was asked not to come back,” Ramsey says. “They reconciled later; there were apologies and forgiveness, but it didn’t end like he hoped.”

“His goal was to spread Christianity. He felt like he was there for 17 years and he never really made a big impact, but the legacy he left is huge.”