(WNS)–A Missouri high school is in tumult after a transgender student—born male but identifying as female—requested permission to use the girls’ locker rooms and restrooms this year. On Monday, Aug. 31, 150 or more students walked out of classes to protest allowing the student to use female facilities.

“The girls have rights, and they shouldn’t have to share a bathroom with a boy,” one parent, Tammy Sorden, told the St. Louis Post-Dispatch.

The transgender student, a 17-year-old senior who goes by the name of Lila Perry, began identifying as female halfway through the last school year. Perry wears wigs and skirts to school and last year was permitted to use a gender-neutral faculty restroom. 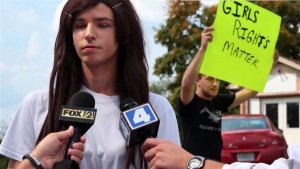 But over the summer Perry, who said he has felt like a girl since the age of 13, told administrators and teachers he no longer wanted to use unisex restrooms. “I am a girl. I am not going to be pushed away to another bathroom,” Perry said, according the Post-Dispatch.

Derrick R. Good, a local attorney who graduated from Hillsboro High, told me the problem started on the first day of school last month, when Perry used the girls’ locker room to change clothes for gym class. Some girls who were using the locker room at the time felt uncomfortable and complained.

Good sought the help of Alliance Defending Freedom, a conservative legal group, and co-wrote a letter to the school board last week. The letter included a suggested policy that would allow transgender students to continue using gender-neutral restrooms, but not facilities designated for the opposite sex.

“Changing clothes or using the restroom are very private activities, and everybody should have that expectation—that they don’t have to do that in front of people that are physically of the opposite sex,” said Good, who has two daughters in Hillsboro schools.

During a school board meeting last Thursday, so many parents showed up that the meeting had to be moved into the gym.

Good estimated as many as 200 students who walked out of classes on Monday were opposed to allowing the transgender student in girls’ facilities, while a smaller group of about 30 protested to support Perry.

The school has apparently not yet settled on a permanent policy.  “The board is still taking it under advisement,” said Superintendent Aaron D. Cornman. He added the board was in contact with an attorney and was scheduled to meet that night.

Some school districts seem to be interpreting legal guidance issued by the U.S. Department of Education last year as requiring them to allow transgender students to use the restroom of their preference. The guidance had addressed gender identity in relation to Title IX, a 1972 law meant to prevent sex discrimination in federally funded schools.

But Matt Sharp, an attorney with Alliance Defending Freedom, said public schools are not obligated, because Title IX explicitly permits segregation by sex.

“Its implementing regulations state that schools may provide separate toilet, locker room, and shower facilities on the basis of sex,” Sharp said. “Accordingly, no court has ever interpreted Title IX as requiring schools to give students access to opposite-sex restrooms and changing areas.”

Good said the students who protested just wanted their voices heard and that parents want a school policy that protects their children’s privacy.

“The parents that I’m dealing with and talking to, they’re not against a particular student,” Good said. “They want some ground rules set out that respect the rights of all students. … Not just one or two.”