(NaturalNews) There’s a really good reason why Monsanto is being called “the world’s most evil corporation.” Since 1901, some of its creations include the artificial sweetener saccharine, pesticides laced with dioxin, Agent Orange, aspartame (created by its partner, G.D. Searle) and the most toxic chemical on the planet – glyphosate. We are literally drowning in poisons because of Monsanto.

Monsanto has truly become this out-of-control, corporate monster immune from regulation or lawsuits. Since the turn of this century, this evil empire dominates the GMO market – while the U.S. government allows for massive environmental destruction due to the aerial spraying of toxic herbicides like, Roundup. Our food supply, waterways and animal life are being poisoned – with no end in sight.

Dr. Seneff says “glyphosate is far more toxic than we’ve been led to believe. There has not been nearly enough research done and we’ve become very complacent in letting the population be the guinea pigs.” The fact is we’ve been deceived for way too long. Chemical companies want us to believe that GMOs and ‘modern’ farming practices will “feed the world” and require ‘less chemicals.’ Yet, chemical usage (by sales volume) keeps going up and up.

We must stop this: Children with cancer are being fed glyphosate

“I find it astonishing that babies and children with cancer are being provided with nutrients through a feeding tube that are contaminated with glyphosate. It ought to be obvious to medical professionals that it is essential to assure that as few toxic chemicals as possible are present in enteral nutrition provided to seriously ill children. This is a direct delivery system for glyphosate to the blood and to the tissues. It should be undeniable that certified organic sources are the only viable option in such a situation,” according to Dr. Seneff. 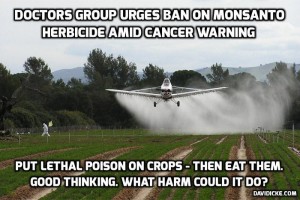 For years, Dr. Seneff has been studying the steady rise in chronic illnesses that we see today and she sees a direct correlation between the increased use of glyphosate and the growing number of sick people. The biochemical effects of consuming glyphosate are devastating to human digestion. At its core, glyphosate blocks nutrient absorption – which means that our society is literally starving itself to a slow, agonizing premature death. (without consent)

The good news: Millions of people are waking up to all this deception in the name of profits over human health. No doubt, it’s this human awakening that has many people in the corporate world and politics quite concerned. Join us for an enlightening show!

Stephanie Seneff is a Senior Research Scientist at MIT’s Computer Science and Artificial Intelligence Laboratory. She has a Bachelor’s degree from MIT in biology with a minor in food and nutrition, and a PhD in Electrical Engineering and Computer Science, also from MIT.

Her research has focused on understanding the effects of certain environmental toxicants, such as aluminum and glyphosate, on human physiology. She proposes that a low-micronutrient, high-carbohydrate diet, combined with excess exposure to environmental toxicants, and insufficient sunlight exposure to the skin and eyes, play a crucial role in many modern conditions and diseases, including heart disease, diabetes, gastrointestinal problems, Alzheimer’s disease and autism.