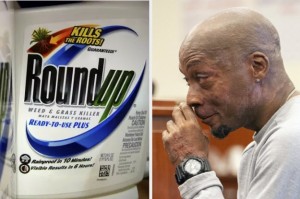 (NaturalHealth365) Is this the beginning of the end for Monsanto? Shareholders of the ‘most hated corporation in the world’ seem to think so – since the news (below) was just released!

One of the flagship products of agricultural giant Monsanto, Roundup weed killer, is about to cost them in a major way. Plaintiff Dewayne Lee Johnson, a school groundskeeper, just won his suit against the company and was awarded a $290 million settlement.

A California jury ruled that Monsanto must pay damages to Johnson after the glyphosate-based weed killer Roundup led to his development of non-Hodgkin’s lymphoma – a particularly rare and aggressive form of cancer.

No surprise here: Monsanto and the EPA downplay cancer health risks of Roundup

Roundup weed killer contains the active ingredient glyphosate, which has already been linked with cancer, including non-Hodgkin’s lymphoma. The verdict is considered a “precedent-setting victory.”

And, while Dewayne Lee Johnson is not doing well physically and may not have too long to live, at least he knows his family will be well provided for when he passes away.

The Monsanto company has consistently denied that its Roundup product or active ingredient glyphosate causes cancer. However, evidence is mounting that it is unsafe and dramatically increases the odds of getting cancer.

As the world’s most widely used herbicide, this is tremendous cause for alarm.

Of course, Monsanto plans to appeal the ruling. But, despite their strong stance, shares in Monsanto’s parent company, Bayer, plummeted after the ruling.