Associate Justice Clarence Thomas was “probably right” in his apparent prediction that the Supreme Court’s recent denial of a stay to halt legalized same-sex marriage in Alabama “is a signal of what the court intends to do,” Russell Moore, president of the Ethics & Religious Liberty Commission, said at a meeting in Orange Beach, Ala. “… I think we do see the court moving toward handing down a decision that would place same-sex marriage as a 14th Amendment issue.”

The 14th Amendment mandates that a state not “deprive any person of life, liberty, or property, without due process of law; nor deny to any person within its jurisdiction the equal protection of the laws.”

Alabama had asked the high court to delay enforcement of a federal judge’s ruling striking down the state’s ban of same-sex marriage until the Supreme Court rules on the issue nationwide. Seven justices agreed to deny the stay, but Thomas and Antonin Scalia dissented. 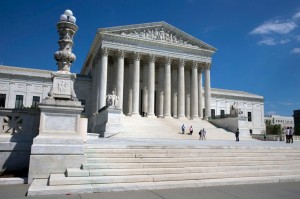 “When courts declare state laws unconstitutional and enjoin state officials from enforcing them, our ordinary practice is to suspend those injunctions from taking effect pending appellate review,” Thomas wrote. “… Yet rather than treat like applicants alike, the Court looks the other way as yet another Federal District Judge casts aside state laws without making any effort to preserve the status quo pending the Court’s resolution of a constitutional question it left open” in a 2013 ruling. The ruling struck down a federal definition of marriage as only between a man and a woman but stopped short of legalizing gay marriage nationwide.

Thomas concluded, “This acquiescence may well be seen as a signal of the Court’s intended resolution of that question. This is not the proper way to discharge our Article III responsibilities. And, it is indecorous for this Court to pretend that it is.”

Moore said religious liberty considerations are “probably something that will have to wait for a different court decision.”

The probable Supreme Court decision legalizing gay marriage would contradict a provision of the court’s 2013 ruling that said marriage should be defined by states, Moore said. He elaborated in a written statement released to Baptist Press.

“The citizens of Alabama are rightly concerned about the non-action–action by the United States Supreme Court in refusing to stay same-sex marriages in the state until the Court hands down its decision this June on the matter,” Moore wrote. “The same Court that ruled in 2013 that marriage should be a state, not a federal matter, is now imposing a federal definition of marriage on a state.”

While commending a biblical view of marriage, Moore said state judges should not disobey federal court orders — presumably a reference to Alabama probate judges who have refused to grant marriage licenses to same-sex couples and Alabama Supreme Court Chief Justice Roy Moore, who has advised probate judges to deny licenses to gay couples.

“As citizens and as Christians, our response should be one of both conviction and of respect for the rule of law (1 Peter 2:13; Romans 13). Our system of government does not allow a state to defy the law of the land,” Russell Moore wrote.

“In a Christian ethic, there is a time for civil disobedience in cases of unjust laws. That’s why, for instance, Rosa Parks and Martin Luther King Jr. went to jail. In the case of judges and state Supreme Court justices, though, civil disobedience, even when necessary, cannot happen in their roles as agents of the state. Religious freedom and conscience objections must be balanced with a state’s obligation to discharge the law,” Moore wrote.

A judge or other government official who is “faced with a decision of violating his conscience or upholding the law would need to resign and protest against it as a citizen if he could not discharge the duties of his office required by law in good conscience,” Moore said.

Roy Moore told National Public Radio in an interview airing Feb. 12 that state judges have as much authority as federal judges to interpret the U.S. Constitution. He added that even if the Supreme Court legalizes gay marriage, it “can’t force a constitutional officer to disobey his oath by performing” a same-sex wedding.