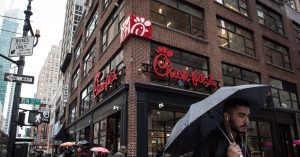 More than 100,000 combined signatures have been gathered on two petitions urging Chick-fil-A to continue supporting ministries that affirm the biblical definition of marriage.

“I am extremely disappointed to know that Chick-fil-A has chosen to abandon great ministries like The Salvation Army, Fellowship of Christian Athletes, and Paul Anderson Youth Home in Georgia,” the American Family Association (AFA) petition reads. “By doing so, it looks like you are abandoning Christian values and agreeing with homosexual activists who say believing the Bible makes you a hater.

“Please clarify that you still hold to biblical teachings regarding human sexuality, marriage, and family, and reinstate these Christian ministries,” the AFA petition concludes.

The Chick-fil-A Foundation on Monday announced a new donation strategy it says will “provide additional clarity and impact with the causes it supports.” Beginning in 2020, the Chick-fil-A Foundation will support Junior Achievement, Covenant House International and local food banks. The new strategy focuses on three areas, according to a press release: education, homelessness and hunger.

Chief Operating Officer Tim Tassopoulos told Bisnow.com that the Foundation would stop funding the Fellowship of Christian Athletes and the Salvation Army. Both organizations have been at the heart of boycotts and opposition from LGBTQ activists.

In response, LGBTQ groups and activists are offering only faint praise for Chick-fil-A’s decision to halt funding for the two faith-based groups, saying the company has to do much more to win their support.

“Chick-fil-A Still Isn’t LGBTQ-Friendly, Despite Pledge on Donations,” read a headline on the website of The Advocate, a major gay news outlet.