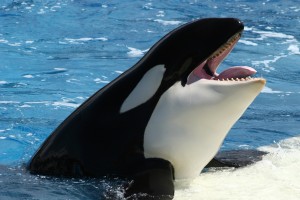 Killer whale (Orca whale) with his mouth wide open and his tongue out and ready to catch some fish.

Animal conservation and animal rights are both issues many on the left care fervently about, yet the same liberals cannot be bothered to care about the plight of millions of their own human species. This reality was made pointedly clear over the last three weeks as people across the world watched and mourned alongside a grieving killer whale mother.

The killer whale — designated J35 by scientists and nicknamed “Tahlequah” — gave birth to a female calf on July 25. At first, “everything was perfect,” wrote Allyson Chiu in an emotionally charged piece for The Washington Post. “She was the first calf to be born alive in three years to the pod.”

Unfortunately, the baby only swam around with the pod for a half hour before she suddenly passed away. “(T)he calf stopped moving, and J35 experienced a mother’s worst horror. She watched her baby die — less than an hour after giving birth to her,” Chiu wrote.

In the days and weeks that followed the calf’s death, Tahlequah pushed its body to the surface of the water over and over, not ready to say goodbye.

Many people have identified with the kind of sorrow Tahlequah exhibited. Marine biologist Deborah Giles compared the whale’s grief to a human’s reaction to losing a child. “That’s part of what people are picking up on, like ‘My God, I would feel the same way. If I had a baby that only took a couple breaths, I wouldn’t want to let it go, either.’”

Yet, while millions can identify with a grieving whale mother and the death of her single calf, the left is unwilling to mourn or even acknowledge the number of human babies who are murdered in the womb every single day.

“It’s always amazing to me how people can be so moved by the action of animals with their young and yet have no regard for their own unborn children,” wrote Gary Demar in Godfather Politics. “Some of these same people will do anything in their power to grant women the freedom to kill their unborn children while grieving along with a whale.”

Demar continued, “An abortionist will respond to my claim that the mother Orca chose to give birth. Let me say that no animal would ever support abortion on demand. They are more protective of their unborn offspring than many humans are with theirs.”

“To whales, a baby is the continuation of their species. It’s their future,” he added. Why can the left care so deeply about a single whale and yet not give a single thought to the murder of millions of human children, members of their very own species?

“People wrote poems about Tahlequah, and drew pictures. People lost sleep thinking about the whale. A scientist cried thinking of her.”

Demar went on to explain that Tahlequah’s grief has caused biologists and government officials to intervene in saving the youngest member of Tahlequah’s pod, “a 3-year-old orca that appears to be on the brink of starvation.”

“They’re now tracking the young whale — Scarlet — in an attempt to feed her antibiotic-laced salmon,” he wrote. “Such concern and regard for whales but little regard for millions of unborn babies.”

If only the left would care as much about the murders of human babies as they do about the natural death of a single whale calf. The disparity in their mentality is just sickening.