Changing The World One Child At A Time

MULLY is a well-told, beautiful documentary that chronicles a Kenyan man’s inspiring journey of faith, sacrifice and listening to God. MULLY truly brings that story to life with a blend of joyful moments and horrific yet tasteful depictions of what it’s like to be an orphan on the streets. MULLY’s story of faith is absolutely worth watching to see the difference one man can make when he listens to God.

The story of Charles Mully is an incredible journey of how one Kenyan orphan was used by God to save more than 10,000 Kenyan orphans. MULLY is a well-told, beautiful documentary that chronicles Mully’s inspiring journey of faith, sacrifice and listening to God, but there’s some mature subject matter requiring caution for younger children. 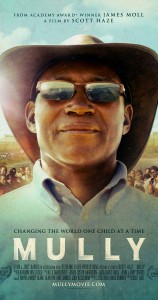 When Charles Mully was 5-years-old, he was abandoned by his mother and abusive, alcoholic father. With nowhere to go, he begged on the streets for 10 years. One woman in Nairobi took pity on him, gave him a job and took him to church. As he grew in his faith, he became a manager at the company and ultimately founded a taxi and bus service throughout Kenya. He got married, had seven children and became a millionaire.

One night, Charles was approached by a group of street beggars. He refused to give them money, even though he was once a beggar himself. When he returned to the street, they had stolen his car. Instead of getting angry or upset, Mully’s heart broke for the children on the streets of Nairobi. In a moment of despair, he cried out, “Yes, God: Use me” and his life changed forever. That evening at the dinner table he announced to his wife and seven children that God wanted him to sell all of his businesses and possessions to provide care for the orphans.

Even though everyone thought he was crazy, Mully prayerfully moved forward with his plans. Every night he walked the streets and picked up orphans to bring back to his home. Soon there were hundreds of orphans living at what Mully now called the “Mully Children’s Family.”
Although he was convinced he was doing God’s work, Mully and his family faced many challenges. The people of his church wouldn’t let some of the drug using street children into the church. Mully’s children didn’t always get along with the orphans he brought home. From a terrible drought, to sickness, to dwindling resources, Mully never lost faith that God would take care of the call on his life. 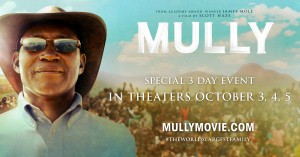 Narrated by Charles Mully, Esther Mully and their seven children, MULLY is a beautiful documentary that puts the viewer at the heart of Mully’s story. The story alone is enough to inspire and enthrall audiences, but the movie truly brings that story to life with a blend of joyful moments and horrific yet tasteful depictions of what it’s like to be an orphan on the streets. At its core, Mully is an inspiring tale of faith similar to Noah or Moses. It will be sure to inspire audiences to assess what is really important in their lives and trust that God will provide for the things he’s asked them to do. The movie is absolutely worth watching, if nothing more than to see the profound affect that one man, through God, had on an entire country.

Mully is now available through most streaming outlets or on DVD.