(WND) – Children were left “petrified” when, during a depiction of the traditional Christian Christmas story, a Somali asylum seeker suddenly jumped on stage and started preaching from the Quran, according to a report in the Express. The report said the unnamed Somali, 24, was wearing a white robe when he jumped up, shouted “Allahu akbar,” and began his rant. Eventually he was overpowered by several men attending the children’s presentation.

“The children are totally anxious and petrified, we were terribly afraid for our children,” a witness told the newspaper. It happened in the Austrian town of Oberndorf, which is in the state of Upper Austria near Schwanenstadt.” It caused a wave of horror among the children and their parents. 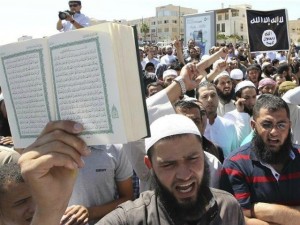 He had just appeared at the venue and had been standing next to the stage where the nursery school-age children were on stage, the Express said. “Witnesses were afraid that some weapons might be hidden in his rucksack though it later proved to contain nothing but clothes,” the Express said, when one witness shared the fear of many. “You never know what his intentions are,” the witness said.

The Somali was identified by police as a man who had been living in the area for several years, and reportedly was being treated for “manic depression.” A German-language report in regional media said the man resisted being removed, shouting “Allah.”

Many in the audience had thought the man originally was part of the presentation.