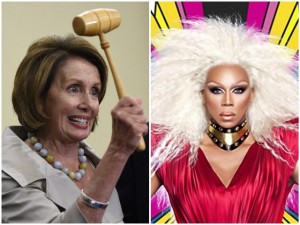 House Minority Leader Nancy Pelosi is broadening her horizons… a lot. Pelosi is taking time off from her liberal nonsense to become a reality television star. Pelosi has announced she’ll be a judge on the next season of VH1’s “RuPaul’s Drag Race All Stars”.

Just when we couldn’t think less of Pelosi, she pulls this stunt? For those unfamiliar with the show, it is a competition series that puts drag queens through a series of challenges. E! is calling this her “reality show debut,” and Pelosi seems excited to be in the spotlight with “queens.”

“You betta werk!” she wrote, quoting a famous RuPaul catch phrase. “Had a fabulous time with @RuPaul and good luck to all the queens.”

Randy Barbato, executive producer of the show, explained that he felt like Pelosi would be a great fit for the show. Critics, though, were too busy wondering if Michelle Obama will make a surprise appearance? Pelosi is a “fierce servant of our nation (and) ‘Drag Race’s’ mission is to teach the children and honor those who fight on our behalf,” said Barbato.

For a woman who recently announced she has a “massive funding gap to fill,” it is a wonder as to how joining a reality show will help her serve the American people.

The next season of the drag queen competition begins January 25th. Excuse us if we don’t tune in.