(WNS)–A spacecraft that can fly from Earth to Mars in three days sounds like the stuff of science fiction, but NASA researchers are working on a new laser technology—photonic propulsion—that may turn science fiction into reality. The system uses an array of lasers to propel a giant reflective sail and can be scaled to any size—from minuscule to gigantic.

Travel to Mars from Earth takes about eight months now, but with the laser array system, a 200-pound robotic aircraft could fly to Mars in a few days. A craft the size of a shuttle would take about a month, Philip Lubin, a physics professor at the University of California, Santa Barbara said in a NASA video.

Conventional spacecraft burn fuel for propulsion. But fuel takes up space, and is heavy and expensive. In order to increase thrust, spacecraft must carry more fuel, which creates more mass and weight, and in turn requires more fuel. The vicious cycle limits the distance a ship can go and the maximum speed it can reach. 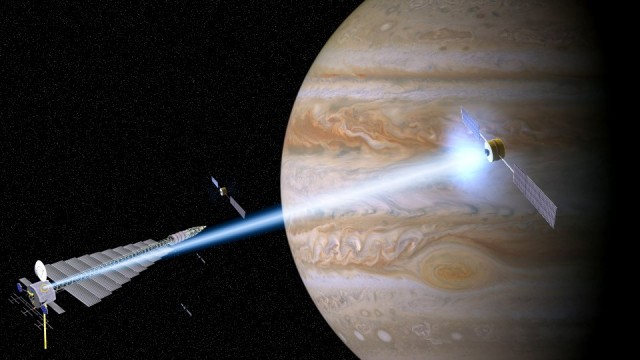 But Lubin’s plan uses an array of lasers, which is easier to build than a single, large laser, to reflect off a wafer-thin sail. As the laser photons bounce off the sail, they create energy to accelerate the spacecraft—no heavy fuel needed.

Initially, Lubin’s team plans to use the laser array system to launch very small probes into deep space. In an academic paper, Lubin explained the technology could propel a probe weighing 1 gram to nearly 26 percent the speed of light in about 10 minutes. It could reach Mars in 30 minutes, scream past Voyager I in less than three days, and reach Alpha Centauri, the nearest star to Earth—just over four light years away—in about 15 years.

A laser array could launch about 40,000 wafer-sized probes each year, complete with cameras, communication technology, and other systems.

Voyager I, launched in 1977, just made its way out of the solar system last year after 38 years of flight at a speed of about 38,000 miles per hour—a clear example that with conventional propulsion, humanity will never make it to even the nearest stars, Lubin wrote.

NASA’s Innovative Advanced Concepts program has granted the project initial funding, but researchers still have some hurdles to clear before a probe sets sail, including developing a rechargeable battery with a long enough life to keep powering the electronics for the trip’s duration.

The team also needs to develop a way to slow the craft. Right now, they have no way to reduce the momentum to prevent a probe from zipping past stars and planets without slowing down to take a look.

Scientists also could use the technology to redirect or vaporize asteroids that might threaten the Earth, or to blast debris out of orbit to prevent it from threatening spacecraft, astronauts, and satellites, Lubin told Popular Science.

“This technology is not science fiction,” Lubin wrote. “Things have changed. The deployment is complex and much remains to be done but it is time to begin.”