On Saturday, April 18th, the Commander of the U.S. Army in Europe, Ben Hodges, told Britain’s Telegraph that “There is a Russian threat, and that The best insurance we have against a showdown is that NATO stands together.”

Ever since the Soviet Union’s military alliance, the Warsaw Pact, dissolved in 1991, NATO has expanded eastward to Russia’s borders, and now it is preparing to admit yet another nation on Russia’s border: Ukraine. This eastward expansion broke (and breaks, since its continuing) a verbal agreement which had produced the termination of the Warsaw Pact (the Soviet Union’s equivalent of Americas NATO alliance).

In February 1990, U.S. President George H.W. Bush sent his Secretary of State, James Baker, to Moscow to negotiate with Soviet leader Mikhail Gorbachev an end to the Cold War. According to Jack Matlock, the U.S. Ambassador to the Soviet Union then, Baker offered Gorbachev the following deal: 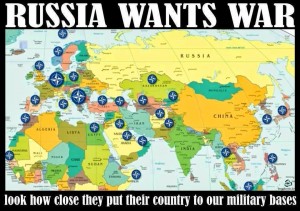 ssuming there is no expansion of NATO jurisdiction to the East, not one inch, what would you prefer, a Germany embedded in NATO, or one that can go independently in any direction it chooses.

Baker knew that Russia, after Hitler’s invasion of Russia in June 1941 (Operation Barbarossa), feared, more than anything, the possibility that an independent Germany would build a nuclear-weapons force and use it against Russia. According to Ray McGovern’s account of the meeting, Gorbachev wasted little time agreeing to the deal.

McGovern, a retired high official of the CIA, blames U.S. President Bill Clinton for breaking that verbal agreement. Gorbachev had gotten nothing in writing from Baker on it, but acted on Baker’s verbal promise. No one has explained why, but the presumption has always been that Baker made clear to Gorbachev that congressional Republicans would have blocked approval of any deal to limit future NATO expansion. Hardly anyone, at that time, would have expected a Democratic Party initiative to expand NATO after its supposed reason-for-existence had ended; but, this is what happened, when the conservative, pro-Wall-Street, Democrat, Bill Clinton, won the White House. (Bill Clinton ended Democratic President Franklin Delano Roosevelt’s Glass-Steagall Act regulation of Wall Street, and then, aided by Wall Street, became enormously wealthy himself with his Foundation. He used liberal rhetoric to hide his conservative objectives, so as to be able to win votes in the Democratic Party.)

This move on Clintons part assured Clinton, in retirement, the support of his Foundation not only by Wall Street but also now by the defense industry, for which NATO serves as the international marketing arm. Expanding NATO means expanding the sales of U.S.-made tanks, bombers, etc.

So: this is the reason why the U.S. lied to Gorbachev, and why U.S. President Barack Obama in February 2014, continued further along Clintons path, by overthrowing the neutralist Ukrainian government and replacing it with a racist-fascist, or ideologically nazi, rabidly anti-Russian government, bent on Russia’s destruction, which has subsequently been bombing the region of Ukraine, Donbass, that had voted 90% for the man whom Obama overthrew, and that would, if the residents there survive within Ukraine, strongly oppose the construction of nuclear-weapons sites aimed against next-door Russia.

McGovern says: “Clintons tough-guy-ism toward Russia was, in part, a response to even more aggressive NATO plans from Clintons Republican opponent Bob Dole, who had been calling for incorporating Poland, the Czech Republic and Hungary as full members of NATO and had accused Clinton of dragging his feet on this. Clinton was not about to be out-toughed. Those three countries joined NATO in 1999, starting a trend. By April 2009, nine more countries became members, bringing the post-Cold War additions to 12 equal to the number of the original 12 NATO states. Ukraine would make that 13.

So, now we understand what Ben Hodges is selling when he sells the ‘Russian threat.’ The competition to be hired by ‘defense’ firms is intense, and he does what he must to win in his chosen field.