“It’s time for the people to rise up and take the government back,” Carson said to a throng of supporters at Detroit Music Hall Center for the Performing Arts.

The formal announcement starts a new chapter in an unusual rise to political prominence for the 63-year-old Republican. Two years ago, Carson assailed President Barack Obama’s policies—particularly on healthcare—with the president only a few feet away at the 2013 National Prayer Breakfast, transforming the doctor from a political unknown to a rock star among conservatives.

Carson’s unusual political style was on full display during his announcement event, which began with diverse musical performances of patriotic and spiritual songs. He began his speech with low-key introductions of his wife and family, followed by his own introduction that prompted a standing ovation: “I am Ben Carson. I’m a candidate for president of the United States of America.”

The surgeon chose Detroit as his announcement location because it’s where he grew up in a poor, single-parent home in the 1960s. In his first best-selling book, Gifted Hands, Carson recounted how his mother’s prayers and the book of Proverbs helped him overcome poor grades and a once-violent temper. 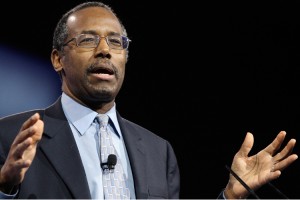 Carson went on to graduate from Yale and the University of Michigan en route to a three-decade career at Johns Hopkins Hospital in Baltimore. In 1987, he became the first doctor to successfully separate twins who were conjoined at the head. Carson, who received the Presidential Medal of Honor in 2008, announced his retirement from Johns Hopkins shortly after his 2013 prayer breakfast speech.

During his remarks, Carson relied heavily on his personal story, focusing on economic issues, including sluggish economic growth and the declining labor participation rate that he blamed on the national debt. He proposed lowering the corporate tax rate and proclaiming a tax holiday to bring back into the economy trillions of dollars companies have stashed offshore: “We are going to change the government into something that resembles a well-run business.”

Carson said he’s not anti-government, but charged political elites with twisting and expanding government to suit their own purposes. He said America needs more upward mobility and fewer programs that create cycles of dependency.

“I am not interested in doing away with social safety nets,” he said speaking in calm, deliberate tones without notes. “I have a strong desire to get rid of programs that create dependency in able-bodied people.”

Carson has shown a relentless desire to take on the establishment in both parties and shun political correctness, stirring controversy for comments on evolution, race, and homosexuality. Few conservatives have questioned Carson’s intelligence, leadership, and conservative bona fides, but some are concerned his lack of political experience is a deal-breaker for what is the nation’s most political job.

The political novice faced his critics head-on in his speech. “I do have a lot of experience solving problems—complex medical problems that have never been solved before,” he said, noting his additional experience with Costco, a biotech company, and a national nonprofit. “I can name a lot of people who have been in politics all their lives, and you probably wouldn’t want them to polish your shoes.”

Due to his deep roots in both Michigan and Maryland—where Republican Larry Hogan pulled off a shocking upset in the governor’s race last fall—some Republicans have called for Carson to run for either state’s open U.S. Senate seat instead of the presidency. He has shown no interest in switching races, but he has time to decide. If he falls out of contention, he could likely drop out and run for Senate in early 2016.

Editor’s note: Some conservatives will not be happy with Carson for President since he strongly favors forced vaccination programs and believes that even religious exemptions should be banned.