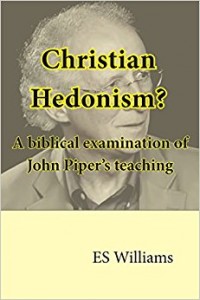 SEATTLE – A newly released book titled “Christian Hedonism? – A biblical examination of John Piper’s teaching,” written by respected British author Dr. ES Williams, is sure to spark discussion and debate among American evangelicals. Examining the teachings of one of America’s most well-known pastors and conference speakers, Dr. Williams, a member of Charles Spurgeon’s London Metropolitan Tabernacle Church, shows how Scripture is being compromised and provides clear evidence that antinomianism is the underlying error upon which Piper’s Christian Hedonism is built.

Moreover, William’s book argues that this “is an insidiously destructive system of false teaching that wrecks the authentic Christian life and shamefully distorts the Word of God.”

Sharing the concerns of Dr. Williams is evangelical leader, John Thackway, pastor of Holywell Evangelical Church in Wales, and editor of The Bible League Quarterly who has written a foreword to the book. Thackway concurs Piper’s Christian Hedonism is a departure from biblical and historic Christianity and a dangerous error saying, “To those who have accepted this Christian philosophy as orthodox…I warmly commend this book.”

Support also comes from a network of American Christians, which includes Cathy Mickels, co-author of “Spiritual Junk Food: The Dumbing Down of Christian Youth.” Mickels says, “The message John Piper delivered at Lou Giglio’s 2017 Atlanta Passion Conference in an atmosphere of a worldly rock concert is an example of Piper’s Christian Hedonism and the dumbing down of college-age students in the extreme.”

Mickels states, “His talk gave God’s Word a new spin by dogmatically declaring ‘the fall of Adam and Eve was not that they disobeyed a commandment’ of God.” Furthermore, she says, “Piper suggested if they were taught to believe Adam and Eve did disobey, they were taught wrong. Hence, he gave thousands of young adults a taste of falsehood rooted in his Christian hedonistic philosophy.”

Christian researcher, Denise Gumprecht, who has worked behind the scene on many projects detailing a compromised American Church and a growing carelessness amongst American Christians, added, “This book is a gift to the Church. If men take the time to read it, they will begin to understand why Christians can no longer blindly follow the teachings of John Piper.”