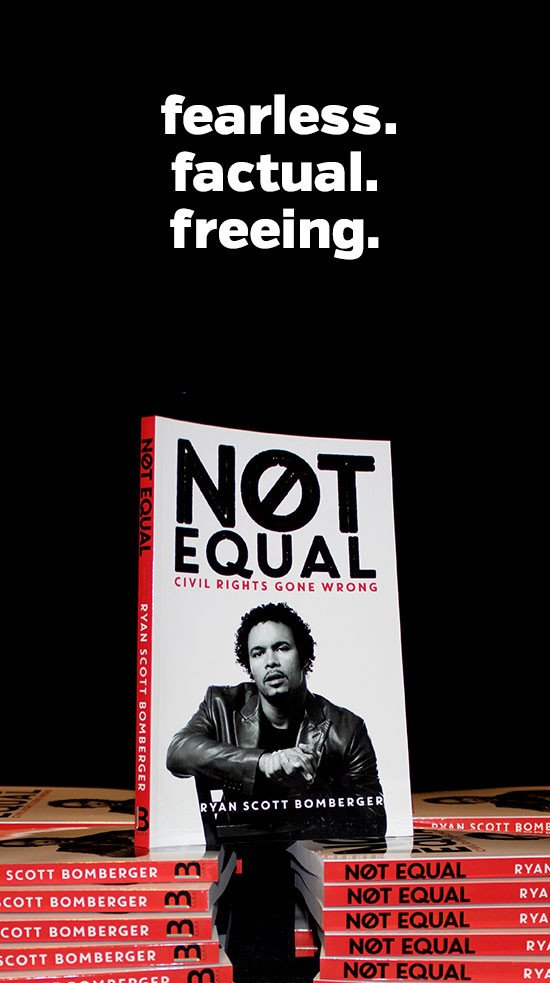 ATLANTA – On the week of June teenth (June 19th), Emmy Award-winning creative director, journalist, prolife factivist, and author Ryan Bomberger will release his first book, NOT EQUAL: Civil Rights Gone Wrong. Bomberger is the Chief Creative Officer of The Radiance Foundation, a life-affirming nonprofit that believes all lives matter, in and out of the womb. Bomberger, who recently emerged victorious in federal court after being sued by the NAACP for exercising his First Amendment right of free speech (for accurately parodying the pro-abortion organization’s name), is passionate about the pursuit of true justice and equality.

NOT EQUAL is that powerful pursuit and details how the civil rights movement has been hijacked. It is a journalistic journey consisting of thousands of hours of research, writing and creative visual memes about the fundamental Right to Life, abortion, adoption, fatherlessness, liberal feminism, marriage, #BlackLivesMatter, free speech, LGBT and judicial activism, and the War on Common Sense.

“Juneteenth is the date we celebrate the abolition of slavery-a racist system which was based on the belief that we are not equal,” says Bomberger. “It’s also the date that I was officially adopted into an incredible multiracial family of 15. Transracial adoption is just another form of beautiful justice and a loving act of racial reconciliation.” This year, June teenth is also Father’s Day. Bomberger is a father of four (two were adopted) whose articles and public speaking often focus on the devastating impact of fatherlessness, especially in the black community.

More black babies are aborted than born alive in our nation’s abortion capital-New York City. In 2013, for every 1,000 black babies born alive there were 1,180 aborted. The black community is the only demographic where more are aborted than born alive. Abortion rates are more than 5 times higher among blacks than whites. Poverty and lack of insurance don’t explain it as Hispanics have nearly the same level of poverty and are far less insured, yet have abortions at half the rate of the black community. Yet abortion activists call these hugely disproportionate deaths “reproductive justice.”

“Pro-abortion liberals and LGBT activists proudly celebrate the most violent form of inequality today-abortion. Their worldview is rooted in the belief that some humans aren’t equal,” Bomberger declares. “Been there. Done with that.”

NOT EQUAL delivers the facts, personal stories, and a creative lens through which liberal inequality is exposed. It is available now at NotEqualBook.com