The faith-based film “I Can Only Imagine” surprised industry watchers by topping Disney’s “Wrinkle in Time” to take the third spot at the box office.

“The movie tells the story of Bart Millard, the lead singer of Christian rock band MercyMe, and what led him to write the bestselling Christian single of all time: ‘I Can Only Imagine,’” CBN News reported.

The film, starring Dennis Quaid and Trace Adkins among a large cast, took in nearly double than expected in ticket proceeds during its opening weekend, with a $17.1 million tally.

The only two movies doing better were Disney/Marvel’s “Black Panther,” which remained in the top stop for the fifth straight week, garnering $27 million, and Warner Brother’s “Tomb Raider,” which in its opening took in $23.5 million, according to Box Office Mojo. 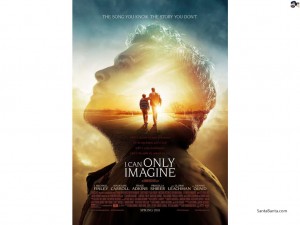 “Imagine” also bested the 20th Century Fox film “Love, Simon” about a teenage boy revealing to friends and family he is a homosexual. The movie earned $11.8 million for a fifth place spot in its opening weekend, with $4,900 per theater.

“Imagine” had a modest $7 million production budget compared to $103 million for “Wrinkle.” The biopic earned an “A+” CinemaScore from its opening day audience, while movie goers gave Wrinkle a “B.”

“Wrinkle in Time” is based on Christian author Madeline L’Engle’s 1962 book of the same name, but the screenwriter of the Disney film took out all references to God, Jesus and the Bible for the movie adaptation. Jennifer Lee (who also wrote “Frozen”) stated in an interview with Uproxx her desire to celebrate “inclusiveness.”

On the other hand, Millard told CBN News during Imagine’s premier in Nashville that the filmmakers did an outstanding job capturing his story of pain, redemption and faith. “The first time I saw it, it was really emotional,” he said. “I guess they did a good job because they stirred some emotions that I spent most of my life trying to bury.”

“Imagine” looks at Millard’s childhood, marked by his parents divorcing and the boy experiencing years of abuse at the hand of his alcoholic father. It goes on to show God’s hand in restoring father to son as they both experience a journey of faith.

Quaid plays Millard’s father in the film. “When I got the script, I had never heard the song. They gave me a script and a CD and I put it to the side. I mean I knew it was huge hit, but I didn’t know it. What hole was I in?” the veteran actor told CBN.

“I read the script and it hit me so profoundly in the heart, in a place where I just don’t even have words, and that’s what the song does. And it grows on you too,” he added.

The MercyMe song “I Can Only Imagine” (2002) has had over 2 million downloads and reached double platinum status.

Christian/pop singer Amy Grant was originally on tap to sing the tune, but she gave it back to Millard.

“I had actually recorded the song twice. But I was in a real transition in my own life. And nobody sings that song like Bart. Everything worked out the way it was meant to be,” she said.

Other Christian movies rolling out include Affirm Film’s “Paul, Apostle of Christ” starring Jim Caviezel opening Mar. 23, and PureFlix’s “God’s Not Dead: A Light in the Darkness” hitting theaters’ Mar. 30.