The report released by Alliance Defending Freedom, titled “Profit. No Matter What.,” consolidates dozens of federal audits that show abortion centers have billed taxpayers for fake procedures, made Medicaid pay twice for the same prescriptions, and destroyed documents, among other things. Planned Parenthood received more than $528 million in government funds for fiscal year 2014, most of which is supposed to go toward non-abortion procedures.

“Planned Parenthood is making money hand over fist. They are a non-profit making a profit,” said Catherine Glenn Foster, a litigation counsel at ADF and author of the report. Foster, who has researched abortion center overbilling since 2011, said on average audited abortion centers take between 10 and 20 percent more from Medicaid than they should. 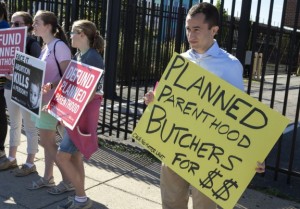 One of the most recent discoveries happened during a March 2015 audit, when Texas looked into the practices of Planned Parenthood of North Texas. Out of a sample of 210 bills sent to Medicaid, 51 duplicated fees or otherwise inflated prices. The audit concluded the Planned Parenthood affiliate wrongfully billed Medicaid $129,028. Earlier, the Texas Ethics Commission fined the same abortion center for failing to report more than $25,000 in campaign contributions to Wendy Davis and other pro-abortion candidates.

Foster hopes ADF’s report will alert legislators to the need to place greater restrictions on Planned Parenthood, and that defunded abortion centers will give way to holistic clinics that provide Medicaid coverage. She ultimately believes public influence will drive Congress to change the laws.

“So much relies on the public, your average taxpayer who wakes up and says, ‘Hey, I didn’t realize my taxpayer dollars were going to fund this,’” she said.