Illinoisans’ tax burden is high. Anyone who lives there and works there knows that. Property taxes. Income taxes. Sales taxes. Annual car registrations fees. And so on.

Seemingly everyone except those who earned it has their hands in our pockets, taking what should belong to us. While we know we pay too much in taxes, the latest analysis by a national financial website puts into perspective the magnitude of that burden.

According to WalletHub, the median household in Illinois pays more in combined state and local taxes than anywhere else in the country — and it’s not even really that close. 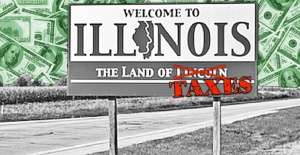 The new analysis released this week at WalletHub.com concludes that Illinois families pay nearly 15 percent — 14.89 percent, to be exact — of their incomes to state and local governments. That amounts to about $8,300 per household annually.

Families in the next-highest tax state in the U.S., Connecticut, contribute more than a full percentage point less — 13.85 percent — of their incomes to their state and local governments, averaging $7,720 per household, a difference of $580 per home annually.

For some more perspective, state and local governments in the six most tax-friendly states — Alaska, Delaware, Montana, Nevada, Wyoming and Tennessee — ask their families to contribute less than $4,500 annually. That’s almost half of what Illinois’ state, cities, townships and other forms of government demand for comparable services.

As a result of our crushing tax burden, Illinoisans are fleeing the state in droves. According to U.S. Census data, Illinois has lost population each of the past four years, with the total declines increasing each year. High taxes is the top reason cited by those moving elsewhere.

The Wall Street Journal reported recently that Illinois lost $4.75 billion in adjusted gross income to other states in the 2015 tax year as a result of the outmigration, which also contributed to the state’s nearly stagnant economic growth — just 0.9 percent since 2012.

Considering the data and potential impact that taxes have on voters, one would think candidates running for statewide office would be campaigning on platforms to reduce Illinoisans’ overall tax burden.

While some are, the three leading Democrats running for governor want to raise taxes even further in the state.

Billionaire J.B. Pritzker, multimillionaire Chris Kennedy, and state Sen. Daniel Biss all say they want to change Illinois’ constitution to allow for a graduated income tax system. The constitution currently mandates a flat income tax, meaning all wage earners pay the same rate (with some exemptions) regardless of how much they earn. The General Assembly last summer raised that flat income tax rate to 4.95 percent from 3.75 percent, resulting in a $5 billion increase in revenue annually to fund state government.

But that’s not enough, according to Pritzker, Kennedy and Biss. If a graduated income tax rate is approved, that top end 4.95 percent rate could jump to 7, 8, 9 or who knows what percent. We simply don’t know how high because the candidates themselves aren’t saying what they’d propose.

However, if the purpose of the graduated tax is to close the deficit gap while spending remains unchecked, there’s no way that anyone could anticipate where the top end of taxation might land. In a tax plan such as this, spending dictates revenues from taxes. In a balanced budget, the expenses are set, and taxes are collected to meet that requirement. That hasn’t been the case in Illinois, of course, where we haven’t had a balanced budget for many years.

Under this plan, the vast majority of Illinois workers — who already shoulder the highest tax burden in the country — would see another tax increase just a year after last summer’s tax hike. Given this week’s WalletHub report, does that make any sense?

“Not in Illinois’ case, since its residents are already paying the highest taxes in the country — $8,330 on the median state household annually,” WalletHub analyst Jill Gonzalez said on Wednesday.

The gap between No. 51 Illinois and No. 50 Connecticut likely would widen, she said, “especially since Illinois has the second highest effective real-estate tax rate in the country at 7.69 percent.”

And what’s worse? “Unfortunately, an increase of the income tax rate would further negatively impact the economic growth of the state,” Gonzales concluded. “Even more taxpayers might choose to relocate in order to avoid what they see as overpaying.”

It is unfathomable that anyone would suggest raising taxes here right now. But, evidence to the contrary, that’s what you get in tax-and-spend Illinois.