“There are a great many Americans who I would say are deeply concerned that Facebook and other tech companies are engaged in a pervasive pattern of bias and political censorship,” the senator said.

His line of questioning led Zuckerberg to acknowledge that the Silicon Valley, where his and many other tech companies are headquartered, is an “extremely left-leaning place” and that he understands why conservatives might be worried. 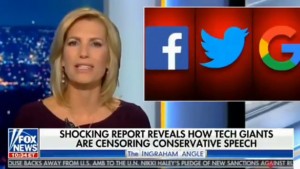 Those concerns were explored in great detail by analysts with the Media Research Center in a new report titled “Censored! How Online Media Companies are Suppressing Conservative Speech.”

After studying banning practices, algorithms and other data available for leading social networking platforms, the report concluded that Twitter “leads” the field in terms of silencing the expression of conservative viewpoints.

Citing a controversial undercover report by the Project Veritas earlier this year, researchers concluded that Twitter has “been censoring conservatives through a technique known as shadow banning, where users think their content is getting seen widely, but it’s not.”

As for Facebook, researchers found that the site’s News Feed has been shown to reflect the left-leaning bias of the curators tasked with selecting featured stories.

A 2016 Gizmodo report used as evidence of this argument cited former employees who confirmed the practice, prompting Facebook to promise an overhaul of the feature.

Facebook has also engaged in unjustified bans of right-wing figures and groups with accounts in apparent compliance with the site’s terms of use, the report found.

A pair of pro-Trump social media commentators known as Diamond and Silk recently accused Facebook of such bias after receiving a notification that their content had been deemed “unsafe” for the site’s community. Facebook has since apologized and indicated that the ruling had been made in error.

According to the MRC report, YouTube has experienced unique issues regarding anti-conservative bias due to the mission it shares with parent company Google.

“YouTube moderators must take their cues from the rest of Google — from shutting down entire conservative channels ‘by mistake’ to removing videos that promote right-wing political views,” the researchers wrote.