The art that was unveiled revealed an incredible depiction of biblical characters, according to a report by the Religion News Service.

The catacombs, also known as underground cemeteries, are named after a Roman noble family and are considered to be the most extensive in the Italian capital, drawing thousands of tourists.

The seven-year restoration was supported by the Vatican and focused on two burial chambers that were commissioned by successful bakers working in ancient Rome in the fourth century.

The uncovered frescoes showed how wealthy Roman aristocrats left their pagan beliefs and turned to Christianity. Many of these frescoes have been recovered over the past 25 years, according to an Italian archaeologist. 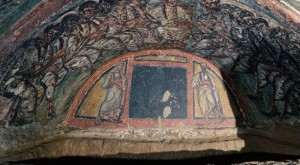 Ancient frescoes have been rediscovered inside the 1,600-year-old Domitilla catacombs in Rome, Italy.

However, the most recent revelation is significant. The latest discovery shows Christ and his apostles. The painting dates back to the fourth century A.D.

“With the use of laser, the decorative work of the two chambers is shown in all its splendor, offering us a real discovery, even though the two chambers have been known about for many centuries,” archeologist Fabrizio Bisconto, head of the Vatican body, said.

The catacombs contain an underground basilica and four levels of corridors, chambers and crypts where 150,000 Christians and martyrs were buried, and they are said to span more than 10 miles.

The newly revealed frescoes were hidden underneath layers of dirt, algae and smoke, left behind by oil lamps. With the lasers, experts discovered frescoes of pagan figures and biblical representations of Moses and Noah on the chamber’s surface. One ceiling showed Jesus on a throne and two men seated beside him.

The head of the Vatican’s Pontifical Council for Culture, Cardinal Gianfranco Ravasi, said the catacombs were a reminder of “the passage of conversion to the new faith” and the importance of the Christian burial area of Domitilla.

“Between the third and fourth centuries they welcomed both the common faithful and the martyrs,” he said. A new museum is reportedly opening at the catacombs this month.

Photos of the Domitilla catacombs can be seen at www.domitilla.info