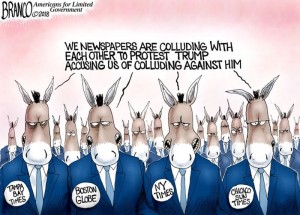 Without ever blinking a jaundiced eye, 100 newspapers followed the Boston Globe’s directive recently with a collective hit job on President Donald Trump.

At press time, not a single newspaper had stepped forward to state that this is proof positive that there is no such thing as an objective free press; that what the Boston Globe called for is nothing less than a coordinated hate attack.

Defiant to the readers in roughly half of the country, the newspapers want it etched in stone, that President Donald Trump is wholly hated. What they’re not saying is that he’s hated by the media, but not by 63 million and counting people from all walks of life.

In other words the failing and fast fading newspaper industry wants to perfect what they’ve been doing for almost two years: the character assassination of President Donald J. Trump. Why are they doing it? They’re doing it because they can.

They’re doing it because as the self-appointed gladiators in the political arena, they can already hear the ear-splitting cheers of their Marxist Masters governing from the swamp, and the adulated members of the current Entertainment Industry et al.

And that’s not even to mention the masses who they have managed to convince that everything going wrong in their lives is the fault of Donald J. Trump.

While the newspapers were putting on their show unhinged groups that likely wouldn’t be there without them, are talking openly about killing Donald Trump.

You can see and hear it for yourself as Johnson posted the video to Twitter complete with captions.

“Here was my question to the progressive protesters (I asked everyone the same question): “If Donald Trump showed up here, what would you say or do?” Over half-dozen progressives voluntarily told me they would kill Trump. This is the *definition* of “Violence on both sides”” (GateWay Pundit)

“I was only at the event for one hour. I had 5 people threaten to physically harm or kill the president. “ON CAMERA. At least a few of these threats are worthy of the @SecretService investigation”

I asked leftist progressives outside the White House today what they would do if they met President Trump.

•“Beat his #.” There is violence on both sides pic.twitter.com/4HoofkZN3F

It never happened. No one wanted to murder Obama as president, and as current leader of the ‘Resistance’, he’s well liked and popular with the groups who want to murder Trump now.

Not only America but the entire Free West has entered a most dangerous time, as the Midterm Election Campaign brings us closer to November 8 Election Day.

Already unhinged since the day Trump toppled Hillary Clinton in the 2016 election—even with Barack Obama on her side—can you imagine what the progressive/left will do if the outcome of Midterms doesn’t return them to power?

Why do Antifa activists believe they can murder (assassinate) Donald Trump?

Because they can already hear the ear-splitting cheers of the Marxist Masters governing from the swamp, the adulated members of the current Entertainment Industry, and the masses who they have convinced that everything going wrong in their lives is the fault of Donald Trump.

It’s time to put aside blowhard journalists of the mainstream and social media and anarchy-seeking Antifa. It’s time to pray fervently that both the infectious media character assassination of the president is brought to a halt, and that President Trump is protected from Antifa and all other activists who want to murder him.

Don’t just gripe about the terrible times in which we now find ourselves living, but pray, brothers and sisters, pray.