(WNS)–The Nigerian Senate on March 15 rejected a bill to end discrimination against women on grounds of religion and tradition—for the third time. The Senate’s vote against the bill, which proposed women’s rights common in most Western nations, generated backlash from many Nigerians, who view it as a constitutional violation.

Sen. Abiodun Olujimi presented the Gender Parity and Prohibition of Violence against Women bill during the Senate’s plenary session. The bill focused on prohibiting all sorts of violence against women and eliminating gender-based discrimination in politics, education, employment, and marriages.

“Widows shall not be subjected to inhuman, humiliating, or degrading treatment,” the bill stated. “A widow shall automatically become the guardian and custodian of her children after the death of her husband, unless this is contrary to the interests and welfare of the children.”

Some senators backed the bill, but it was defeated after a majority voted against it. Nigeria’s Senate majority leader, Ali Ndume, criticized the bill during the session and asked Nigerians to stick with either religious or traditional marriages. Sen. Emmanuel Bwacha claimed Christianity does not support total freedom for women, while Sen. Sani Yerima added the bill negates Sharia law, which the 1999 constitution recognizes. 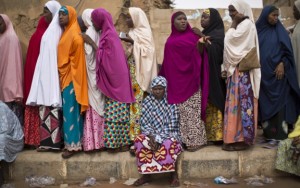 But Nigerians are calling the senators’ remarks a misrepresentation of religion.

“This is using religion as a slope slide to promote social injustice,” said Funmi Para-Mallam, a professor of gender and development studies at the National Institute for Policy and Strategic Studies in Nigeria. “The opposition by these senators is a direct violation of Nigeria’s constitution, because the Nigerian constitution guarantees all persons in Nigeria protection from discrimination on the grounds of sex.”

In voting down the bill, the Senate failed to uphold the principles of a 2006 National Gender Policy enacted by the Nigerian government, which seeks to promote the rights and welfare of Nigerian women and children in the country, Para-Mallam added.

Many Nigerians took to Twitter to voice their disapproval of the Senate’s action. The women’s wing of the Nigerian Labor Congress also responded by calling on all women to mobilize and stand up for their rights, while others voiced their dissatisfaction in local media.

“The rejection means it is okay to kidnap our girls, rape them, use them as sex slaves, marry them as minors, and deny them their right to joyful childhood and education,” Nkechi Odinukwu, a Nigerian legal practitioner, told the News Agency of Nigeria.

“The beauty of democracy is that it gives us the opportunity to consider different opinions, and the bill can still be represented and reconsidered on the floor of the Senate,” Saraki said in a written statement.