Nike takes a knee with Kaepernick They have shown their true colors by backing Kaepernick’s anti-American propaganda, and it’s time to drop Nike like the rotten, wormy apple they really are

When people go to a footbal 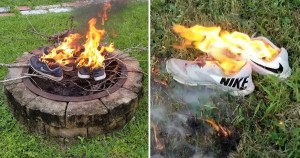 l game, they go to see the game not some anti-America, social justice warrior protesting. We don’t go to football games to see political propaganda and grandstanding. There’s enough of that thrown in our faces by the fake news media every day. Now Nike has decided to throw their support and money behind an anti-American, Colin Kaepernick, and throw him back in our faces, whether we like it or not.

Moreover, Nike launched a new Kaepernick campaign featuring Kaepernick’s face with a caption that reads. “Believe in something. Even if it means sacrificing everything.”

The question I have for Nike executives is this: What exactly has Kaepernick sacrificed? Obviously, Kaepernick hasn’t sacrificed anything for this country or anyone else. Furthermore, the football viewing public rejected Kaepernick’s National Anthem protest, and we made it clear that we don’t want him in our face anymore.

However, Nike defended their decision to front Kaepernick’s anti-American message by stating they believe in an individual’s right to protest. For your information Nike, the majority of people who go to football games do too, but not on our dime, not on our time and not against our country. We pay to see a football game not a protest against our own country. There’s a time and a place to protest, and we don’t like it when millionaire football players strut their hatred of our country in our faces. It was our money that made them rich, and we have a right to stay home and keep our money. The NFL learned that the hard way.

Now it’s time for Nike to learn the same lesson the same way the NFL did. Nike executives may think that we can’t see their contempt for our country. However, their support for a man who wants to divide people and tear our country down makes it obvious that Nike executives have no respect for America or their American customers. If Nike respected us as Americans or customers, they wouldn’t be throwing Kaepernick back in our face after we rejected him and his anti-American protests.

On top of that, Nike’s factories are located in Asia, Indonesia, China, Taiwan, India, Thailand, Vietnam, Pakistan, Philippines, Malaysia and Mexico. There’s nothing American about Nike or their Converse brand. In fact, Nike has been criticized for running sweatshops in China, Vietnam, Indonesia and Mexico. According to the Paradise Papers, Nike also used offshore companies to avoid paying U.S. taxes. Nike doesn’t support America, so why should we support Nike?

Finally, people are burning their Nike shoes and apparel in YouTube videos and vowing to never buy anything made by Nike again. In my opinion, Nike doesn’t deserve our patronage. They have shown their true colors by backing Kaepernick’s anti-American propaganda, and it’s time to drop Nike like the rotten, wormy apple they really are.