No Confirmation of Supreme Court Nominee 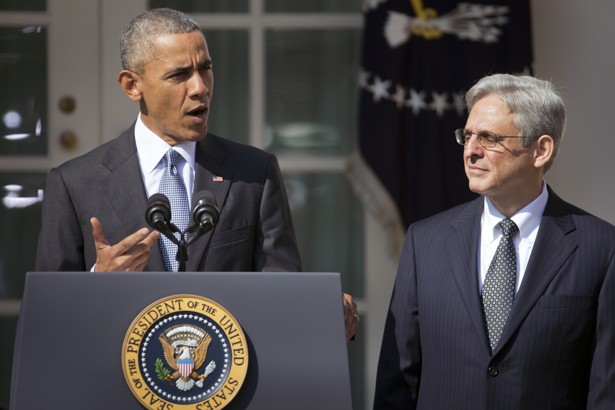 Federal appeals court judge Merrick Garland, right, stands with President Barack Obama as he is introduced as Obama’s nominee for the Supreme Court during an announcement in the Rose Garden of the White House, in Washington, Wednesday, March 16, 2016. (AP Photo/Pablo Martinez Monsivais)

On March 16th, President Obama announced his nomination of Judge Merrick Garland to succeed the late, great Justice Antonin Scalia on the United States Supreme Court. The U.S. Senate should follow the famous advice of the late First Lady Nancy Reagan and “just say no” to Obama’s nominee.

The media are portraying Judge Garland as a “moderate” and a “centrist” — but that’s what they also said about Obama’s two previous nominees (Elena Kagan and Sonia Sotomayor) and Bill Clinton’s two nominees (Ruth Bader Ginsburg and Stephen Breyer). Yet all four of those so-called “moderates” voted in lockstep for the Windsor and Obergefell decisions, which overturned the definition of marriage in federal and state laws.

In his current position as a Judge on the U.S. Court of Appeals for the D.C. Circuit, which hears disputes involving federal regulations, Judge Garland has not had the opportunity to rule directly on marriage or abortion. However, in two cases he voted against the individual right to keep and bear arms, which means the landmark Heller decision written by Justice Scalia would likely be overturned if Garland joins the Court.

On the wide range of critical issues coming before the Supreme Court, Judge Garland’s views are no different from those of the two Justices already appointed to the bench by Obama. More importantly, his selection comes just as voters have the chance to end Obama’s stated goal of “fundamentally transforming” our country.

The late Justice Antonin Scalia was the Supreme Court’s most outspoken conservative, so anyone nominated by President Obama would shift the balance of the Court to the left. The New York Times admitted that “If Judge Garland is confirmed, he could tip the ideological balance to create the most liberal Supreme Court in 50 years.”

Even if he is “moderate” in his temperament, Judge Garland would certainly be a reliable fifth vote for liberal Justices Ginsburg, Breyer, Sotomayor, and Kagan. Those five Justices would form a new liberal working majority on the Supreme Court.

Don’t let a lame-duck president make an appointment that would extend liberal control over the Supreme Court for decades to come. Americans deserve a chance to weigh in on this momentous decision by voting for a president they know will pick at least one new justice.

Bravo to Senate Majority Leader Mitch McConnell (R-KY) and Judiciary Committee Chairman Chuck Grassley (R-IA) for saying they will not consider any nominee this year. Encourage your senators to do the same. Call or email your senator and say that no Supreme Court appointment should be considered until a new president takes office.

The Court can continue to function indefinitely with fewer than nine Justices, as it has many times in our history. There’s nothing magic about the number nine, which was prescribed by Congress, not the Constitution.

If Republicans elect the next president and retain control of Congress, there will be plenty of time to add new Justices to the Supreme Court. One scholar proposed expanding the size of the Court to 11 or more Justices, since a larger Court reduces the likelihood that any single appointee would fundamentally change the Court’s direction.

In addition to controlling the size of the Supreme Court, Congress could also authorize the President to nominate new Justices on a regular timetable – say, one during each two-year term of Congress. Under that system, a new Justice would join the Supreme Court every two years, regardless of whether an existing Justice dies or retires during that period.