North Carolina Florist Was Praying When She Spotted Charleston Shooter’s Car, Gives Credit to God For Catching Him

Debbie Dills was late for work at the florist shop when she was wheeling her way down Highway 74 near Kings Mountain, North Carolina.

The previous evening she spent at church herself, so she was stunned when she got home and learned about the horrific massacre of nine people at a Wednesday night Bible study in Charleston at the historic Emanuel AME Church.

“I was praying for them and had been praying for them since the night before,” Dills told MSNBC News, as she broke down and wept. “I can’t imagine the fear that had to be in their hearts when they were there just studying the Word trying to get closer to the Lord and learn what He wants for their lives.”

“They were shot. They were massacred and didn’t deserve that. They were on my heart and my mind heavy, I just was praying for them and hoping it would help them to find a little peace in such a terrible horrific situation,” she said.

Over 240 miles from the site of the shooting, praying in her car with her eyes open, she suddenly focused like a radar beam on a car that jumped into her field of vision. “It looked familiar to me and I wondered why and then I realized it was the picture I had seen on the news,” she told MSNBC.

“I don’t know why I paid close attention but I’m calling it divine intervention,” she says.

Dills went past the car, then slowed down so she could look it over once more. She noticed the South Carolina license plate. Then she saw the “bowl” haircut on the young male driver.

“I was nervous, I was scared,” she admitted. “I started talking to the Lord about it,” she told Fox News. “I know I had someone looking out for me and who was in control of the whole situation.”

She pulled off the road and thought, What if it really was him?

“I wasn’t sure. I didn’t want to get anybody else in trouble or over-react, so I called my boss.” 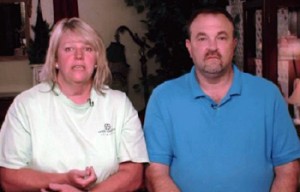 After she reached her boss at the florist shop, he set up a three-way call with Kings Mountain Police. “He told me to get back on the 74 and catch up with him and that’s what I did.”

Then she trailed the dangerous fugitive for 35 miles until police could catch up.

“I’m not the hero, God is the hero,” she exclaimed. “If we are willing vessels He can use us, but we have to open up our hearts and our minds,” she told Fox.

“I don’t know why He chose me to do this, but He’s got to be glorified in all, in everything. He’s got to get the glory one way or another.” “I hope He’s pleased with me. I want Him to be pleased with me more than anything else.”

She credits God for placing her in that moment, when she could make a difference. “That’s the kind of God I serve! The prayers of the people in Charleston were heard. He puts us where we need to be when we need to be there.”