“Let’s face it: The tax code has always been hard to understand,” says an H&R Block video. “And now that the Affordable Care Act has made healthcare a tax issue, no one can understand it.”

From the perspective of the nation’s largest retail tax-preparation company, that’s money in the bank. “Generally tax complexity is a good thing for H&R Block,” the company’s CEO, Bill Cobb, told Reuters.

From the standpoint of the average taxpayer, on the other hand, it’s time and money wasted on bureaucracy. Worse still, all that extra effort and cost may lead to a lower refund. 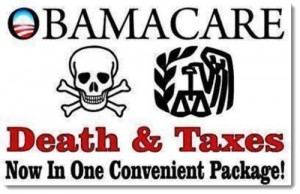 “As expected, the forms are very detailed and can present significant complexity, depending on a filer’s coverage status during the year, income level, and household composition,” Cobb told the Washington Examiner in September. “Depending on their situation, there are instances where filers may need to file multiple new tax forms and complete additional worksheets.”

One look at Internal Revenue Service (IRS) Publication 5187, which gamely attempts to guide taxpayers through the ObamaCare tax maze, bears out Cobb’s contentions. The publication, consisting of 21 densely worded pages, names three forms involved in the tax-filing process and nine other publications that may assist taxpayers in this endeavor.

Form 1095-A will be mailed to all Americans with subsidized exchange coverage. The information on this form is used to complete Form 8962, where the subsidy to which the taxpayer is entitled is calculated.

Mark Jaeger, a tax team leader at software company Tax Act, told the Daily Caller that many recipients will “most definitely” be confused by Form 8962.

“Millions of people who were used to doing a simple 1040 EZ form are going to be required, now, to fill out this complicated 8962 tax form,” Grace Marie Turner, president of the nonprofit Galen Institute, told the conservative website.

What’s more, the subsidy calculated at filing time, based on actual income, may not comport with the subsidy the taxpayer was granted when applying for coverage, which was based on estimated income. If the filing-time subsidy is lower than the original subsidy, the taxpayer will be responsible for paying back the difference.

“According to H&R Block, as many as 3.4 million people who received subsidies for health insurance will have reduced tax refunds this year due to underestimating their income,” reports the Cheat Sheet. “Vanderbilt University assistant professor John Graves told the Wall Street Journal that the average subsidy amount is expected to be about $208 too high for 2014.”

Those who did not have government-approved health insurance last year, whether from an employer, the individual market, or the exchange, must complete Form 8965. There, the taxpayer can either obtain an exemption or calculate his “individual shared responsibility payment,” i.e., the penalty he must pay for not coming to heel. 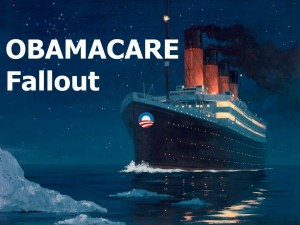 Exemptions are available to specified groups including prisoners, Indian tribes, and people with religious objections, such as the Amish. Those who could not afford insurance can also apply for a “hardship exemption.” But obtaining an exemption may not be easy.

“Depending on the type of exemption, the process to claim it could be quite cumbersome and time consuming,” Cobb told the Examiner.

The penalty calculation, meanwhile, begins with determining the taxpayer’s income threshold, which he must detail for every month of the year. Determining the threshold requires reference to a table found on the IRS website, not in the instructions. After that, the calculations become so complex that additional worksheets (included in the instructions) must be completed in order to arrive at the final penalty amount.

The penalty “calculation is rather complicated,” Andrew Townsend, another Tax Act analyst, told the Daily Caller. “It’s not something people are going to be able to find on their return,” he said. “It is a totally separate calculation that they’ll be needing to do.”

Once they arrive at their penalty amount, many taxpayers may be shocked at how large it is. Many people are under the impression that the penalty for 2014 is $95, the figure most widely cited in the press. In actuality, however, the penalty is $95 or one percent of household income, whichever is higher — and it goes up significantly over the next two years, ending up at $695 or 2.5 percent of income. Online tax service TurboTax estimates that the average penalty for 2014 will be $301 — more than triple the most-advertised amount.

“People would hear the $95, quit listening, and make an assumption that that was what their penalty was going to be,” Chuck Lovelace, vice president of affordable care for Liberty Tax Service, told the Washington Times. “I think that a lot of people will be surprised when they get in there and find out that their penalty is [based] on their household income.”

The penalty is subtracted from any refund owed the taxpayer, but don’t think you’re off the hook if you owe it but aren’t getting a refund this year. “If you owe a penalty,” notes the Cheat Sheet, “the IRS will hold back the amount of the fee from any future tax refunds.” (Emphasis added.) In other words, if you want to escape the penalty forever, you’ll have to make sure you always underpay your taxes during the year.

ObamaCare really has made filing income-tax returns considerably more complicated and unpleasant. And don’t expect the IRS to be any help: Claiming its own hardship exemption due to a slight budget cut, the agency says it won’t answer most calls, will take a long time to answer those it does, and will answer only the most basic of questions.

The IRS is also refusing to assist low-income taxpayers in filing their returns, which could be a huge problem this year. A significant percentage of exchange enrollees signed up because they had incomes low enough to make them eligible for subsidies, and they are going to need help with their tax forms. Yet according to an H&R Block Tax Institute survey, 72 percent of lower-income respondents were unaware of the healthcare law’s tax-filing requirements.

Former IRS commissioner Mark Everson told the Daily Caller that the new tax requirements will deliver “a shock to the system.”

“Low income filers are not used to itemizing and it will be a big challenge for them,” he said. “You’re introducing a whole new level of complexity.”

Turner likewise characterized the new requirements as “a nightmare,” saying, “People don’t even know that they have to comply with this law through their tax filing.”

All of this is bad news for taxpayers but good news for tax preparers. H&R Block expects about a fourth of its estimated 13.9 million retail-location clients to fill out one of the two new forms this year. At an estimated $5 to $30 charge per form, that means the company could pocket as much as $104 million on the strength of ObamaCare alone — possibly even more if the new requirements prompt more people to seek tax-preparation assistance. In other words, what ObamaCare has done for healthcare — make it less affordable — it has also done for tax preparation.