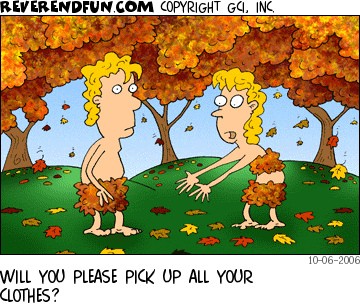 Playing to beat the band

A musician who joined an orchestra on a cruise ship was having a terrible time keeping time with the rest of the band.  Finally, the band leader said, “Look, either you learn to keep time or I’ll throw you overboard. It’s up to you, sync or swim.”

When you get to your wit’s end, you’ll find God lives there.

A state trooper pulled a farmer over for speeding, and he was quite rude about it. As he wrote ticket he swatted at some flies buzzing around his head.  Farmer: “Having some problems with circle flies there are ya?”  Trooper: “Is that what they are? I’ve never heard of circle flies.”  Farmer: “They’re common ’round here. We call ’em circle flies because they mostly circle round the back end of a horse.”  Trooper: “Hey! Are you trying to call me a horse’s behind?”  Farmer: “Oh no, officer! I have too much respect for law enforcement.”   (…long pause…)   Farmer: “…Hard to fool them flies, though.”

Q. Why do seagulls live near the sea?

A. If they lived near the bay, they’d be bagels.

A teacher was giving a lesson on the circulation of the blood. Trying to make the matter clearer, she said, “Now, class, if I stood on my head, the blood, as you know, would run into it, and I would turn red in the face.”  “Yes,” the class said. “Then why is it that while I am standing upright in the ordinary position the blood doesn’t run into my feet?” A little fellow shouted, “Cuz your feet ain’t empty.”

Unfortunately, I do most of my best proofreading after I hit Send!

Rushing to work, I was driving too fast and as a result was pulled over by the highway patrol. The state trooper noticed that my shirt had the name of a local high school on it. “I teach math there,” I explained.

The trooper smiled, and said, “Okay, here’s a problem. A teacher is speeding down the highway at 16 m.p.h. over the limit. At $12 for every mile, plus $40 court costs, plus the rise in her insurance, what’s her total cost?”  I replied, “Taking that total, subtracting the low salary I receive, multiplying by the number of kids who hate math, then adding to that the fact that none of us would be anywhere without teachers, I’d say zero.”  He handed me back my license. “Math was never my favorite subject,” he admitted. “Please slow down.”

Several women, each trying to one-up the other, appeared in court, each accusing the others of causing the trouble they were having in the apartment building where they lived. The judge, with Solomon-like wisdom decreed, “Okay, I’m ready to hear the evidence…I’ll hear the oldest first.” The case was dismissed for lack of testimony.

Husband’s Message (by cellphone): Honey, I was involved in a car accident.  Paula brought me to the Hospital.  They have been making tests and taking X-rays. The blow to my head has been very severe, fortunately it seems that it did not cause any serious injury. But I have three broken ribs, a compound fracture in the left leg, and they may have to amputate the right foot.  Wife’s Response:  Who is Paula?

No matter how hard you hug your money, it never hugs back.

~ Diplomacy: The art of letting other people have your own way ~ Document: Repeating what your doctor told you in your own words ~ Dogma: A mother dog ~ Earthquake: A topographical error ~ Eclipse: What a gardener does to your hedge ~ Eyedropper: A clumsy ophthalmologist  ~ Fairy Tale: A horror story to prepare children for the newspapers  ~ Falsehood: Someone who pretends to be a gangster  ~ Feast: An eat wave ~ Fission: What Huck Finn did when he played hookey  ~ Flattery: Phony express ~ Geezer:  Formerly known as studmuffin  ~ Geometry: What the acorn said when it grew up ~ Grateful: What it takes to build a good fire ~ Ground beef: A cow with no legs ~ Handicap: A ready-to-use hat ~ Hanging: A suspended sentence ~ Hari-Kari: Transporting a wig ~ Heroes: What a guy in a boat does ~ Hunger: What the posse did to the lady rustler ~ Hypochondriac: A guy who won’t let well enough alone ~ Hypothesis: What a boy says to his father on the telephone ~ Indecision: Under the whether.

The children had all been photographed, and the teacher was trying to persuade them each to buy a copy of the group picture.  “Just think how nice it will be to look at it when you are all grown up and say, ‘There’s Jennifer, she’s a lawyer,’ or ‘That’s Michael, He’s a doctor.’”  A small voice at the back of the room rang out, “’And there’s the teacher, she’s dead.’”

Faith is the certainty that God’s will is being carried out, even when it doesn’t look like it.

My fitness coach told me to bend down and touch my toes. I told him, “I don’t have that kind of relationship with my feet. May I just wave?”

It’s The Thought That Counts

Three sons left home, went out on their own and prospered. Getting back together, they discussed the gifts they were able to give their elderly mother.  The first said, “I built a big house for our mother.” The second said, “I sent her a Mercedes with a driver.” The third smiled and said, “I’ve got you both beat.  You remember how mom enjoyed reading the Bible? And you know she can’t see very well. So I sent her a remarkable parrot that recites the entire Bible. It took elders in the Church 12 years to teach him. He’s one of a kind. Mama just has to name the chapter and verse, and the parrot recites it.”

Soon thereafter, mom sent out her letters of thanks: “David,” she wrote one son, “The house you built is so huge. I live in only one room, but I have to clean the whole house.”  “John,” she wrote to another, “I am too old to travel. I stay most of the time at home, so I rarely use the Mercedes. And the driver is so rude!” “Dearest Jeffrey,” she wrote to her third son, “You have the good sense to know what your mother likes. The chicken was delicious.”

The Atheist and the Little Girl

An atheist was seated next to a little girl on an airplane and he turned to her and said, “Do you want to talk? Flights go quicker if you strike up a conversation with your fellow passenger.” The little girl, who had just started to read her book, replied to the total stranger, “What would you want to talk about?”

“Oh, I don’t know,” said the atheist. “How about why there is no God, or no Heaven or Hell, or no life after death?” as he smiled smugly. “Okay,” she said. “Those could be interesting topics but let me ask you a question first. A horse, a cow, and a deer all eat the same stuff – grass. Yet a deer excretes little pellets, while a cow turns out a flat patty, but a horse produces clumps. Why do you suppose that is?”

The atheist, visibly surprised by the little girl’s intelligence, thinks about it and says, “Hmmm, I have no idea.” To which the little girl replies, “Do you really feel qualified to discuss God, Heaven and Hell, or life after death, when you don’t know crap?”

And then she went back to reading her book.

There was a little old lady who was very spiritual who would step  out on her porch every day, raise her arms to the sky and  yell, “Praise the Lord” One day, an atheist bought the house next door to her, and he became very irritated with the spiritual lady.  So after a month or so of her yelling, “Praise the Lord” from her porch, he would go outside on his porch and yelled back, “There is no Lord.”

The next morning, she went outside, and there were bags of  food  on  the porch, enough to last her a week. “Praise the Lord,” she yelled. The Atheist stepped out from the bushes and said, “There is no Lord, ha ha ha, I bought those groceries!

The  little  old  lady  raised her arms to the sky and said,  “Praise the Lord, You sent me groceries and you made the Devil pay for them!”