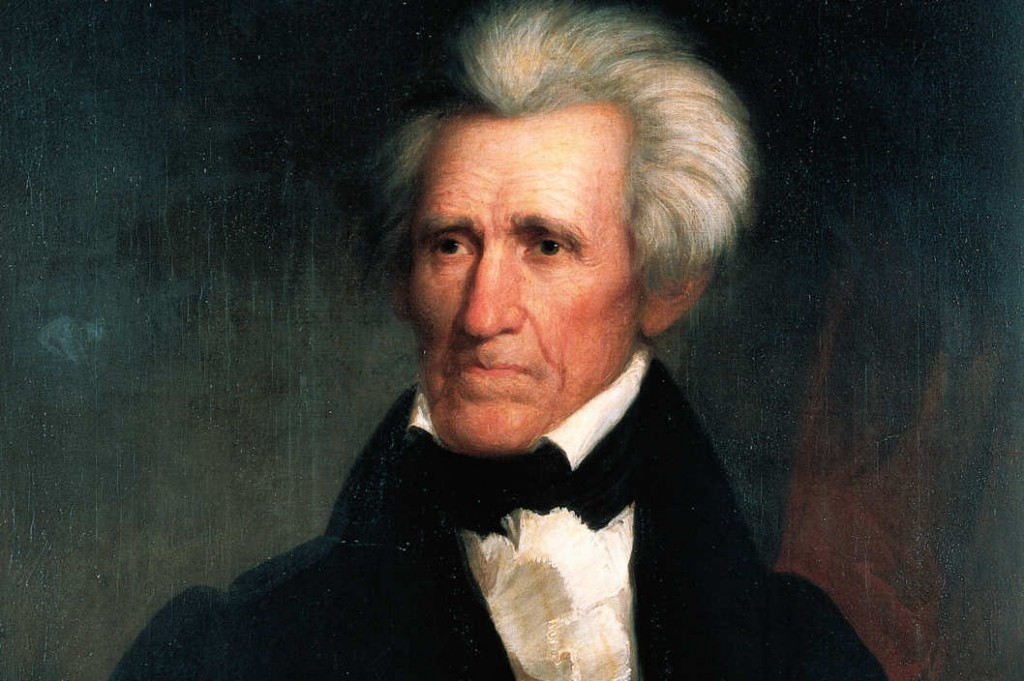 His Scots-Irish parents emigrated from Ireland two years before his birth, which was March 15, 1767.

His father died before he was born. At age 13, Andrew Jackson joined a local militia to fight during the Revolutionary War.

His eldest brother, Hugh Jackson, died during the Battle of Stono Ferry, June 20, 1779. Andrew Jackson and another brother, Robert, were taken prisoner and nearly starved to death. Robert contracted smallpox in prison and died.

A British officer ordered young Andrew Jackson to polish the boots.  When Andrew refused, the officer drew his sword and slashed him across the head, arm and hand, leaving Andrew with permanent scars.

Buildings were converted into prisons, and many prisoners were put on British starving ships where they contracted diseases. Andrew Jackson’s mother, Elizabeth, along with other women, volunteered to care for the sick American prisoners. Tragically, Elizabeth contracted “ship fever” and died, being buried in an unmarked grave.

Andrew Jackson was an orphan at age 14. Jackson supported and educated himself, eventually becoming a frontier country lawyer, In 1788, at the age of 21, was appointed prosecutor of the Western District.

In 1796, at the age of 29, Jackson was elected as a delegate to the Tennessee constitutional convention, where he is credited with proposing the Indian name ‘Tennessee.’ Tennessee citizens elected Jackson a U.S. Congressman then U.S. Senator.

In 1798, Jackson served as a judge on Tennessee’s Supreme Court. Speculating in land, Jackson bought the Hermitage plantation near Nashville and was one of three investors who founded Memphis.

Sam Houston and David Crockett both served under Jackson. A strict battlefield officer, Jackson was described as being “tough as old hickory,” leading to his nickname “Old Hickory”.

Against overwhelming odds, Andrew Jackson defeated the British at the Battle of New Orleans in January 8, 1815. Over 2,000 British were killed or wounded, as compared to only 71 American casualties.

Jackson invaded Spanish Florida, defeated Seminole Indians and served as the Territorial Governor of Florida. Jacksonville, Florida is named after him.

Andrew Jackson carried bullet fragments in his body from duels, most notably from defending his wife’s honor. The stressful personal attacks during his Presidential campaign contributed to his wife Rachel’s death just three months before he took office.

The 7th U.S. President, Andrew Jackson stated in his 2nd Inaugural: “It is my fervent prayer to that Almighty Being before whom I now stand, and who has kept us in His hands from the infancy of our Republic to the present day…that He will…inspire the hearts of my fellow-citizens that we may be preserved from danger.”

Andrew Jackson, who is considered the founder of the modern Democrat Party, unfortunately supported slavery and the tragic Indian Removal Act.

When Nicholas Biddle sought to have his Second Bank of the United States gain monopoly control over the nation’s financial system, Andrew Jackson stopped it in what is referred to as The Bank War.

Andrew Jackson told his Vice-President Martin Van Buren: “The bank, Mr. Van Buren, is trying to kill me, but I will kill it.”

During The Bank War, there was an assassination attempt on Andrew Jackson, January 30, 1835. The assailant fired two pistols at point blank range, but the damp fog in Washington, DC. caused the gunpowder to misfire. Davy Crockett wrestled the assailant down.

King William IV of England heard of the incident and expressed his concern. President Jackson wrote back, exclaiming: “A kind of Providence had been pleased to shield me against the recent attempt upon my life, and irresistibly carried many minds to the belief in a superintending Providence.”

Andrew Jackson completely paid off the national debt, which was the only time in American history this was done.

Since Andrew Jackson’s wife had died, his nephew’s wife, Emily Donelson, served as the unofficial First Lady. When Emily Donelson died, Andrew Jackson wrote to his nephew, Colonel Andrew Jackson Donelson, December 30, 1836: “We cannot recall her, we are commanded by our dear Saviour, not to mourn for the dead, but for the living…She has changed a world of woe for a world of eternal happiness, and we ought to prepare as we too must follow… ‘The Lord’s will be done on earth as it is in heaven.'”

On March 25, 1835, Andrew Jackson wrote in a letter: “I was brought up a rigid Presbyterian, to which I have always adhered. Our excellent Constitution guarantees to every one freedom of religion, and charity tells us (and you know Charity is the real basis of all true religion)…judge the tree by its fruit. All who profess Christianity believe in a Saviour, and that by and through Him we must be saved.”

Andrew Jackson concluded: “We ought, therefore, to consider all good Christians whose walks correspond with their professions, be they Presbyterian, Episcopalian, Baptist, Methodist or Roman Catholic.”

On JUNE 8, 1845, “Old Hickory” died. Of the Bible, Andrew Jackson stated: “That book, Sir, is the Rock upon which our republic rests.”