One Abortionist’s Painful Path to Life

It took the death of his own daughter to make Dr. Anthony Levatino realize abortions kill children

Editor’s note: On the anniversary of Roe v. Wade, we’re sharing the story of one abortionist who quit after realizing he was killing people’s children for money. Dr. Anthony Levatino quit the abortion industry in the mid-1980s. He became a Christian years later and now uses his experience and expertise as both a doctor and a lawyer to further the pro-life cause. Levatino is a medical director for two pregnancy health centers, has founded a crisis pregnancy center, is a medical adviser for Priests for Life, is friends with the founders of the Pro-life Action League, works for National Right to Life, and has testified before Congress against abortion four times. Patrick Henry College journalism student Hannah Zarr interviewed Levatino extensively for this report. Warning—it contains graphic descriptions of several abortion procedures.

Dr. Anthony Levatino was just doing his job. As an OB/GYN in Troy, N.Y., in the 1970s and into the mid-1980s, he often used his ultrasound machine to find a baby’s heartbeat and set a worried mother’s mind at ease. He would let her hear the rapid patter.

An hour later, with a different woman, he would use the same ultrasound machine to help inject saline solution into the fetal sac. He would stick the needle through the patient’s skin and uterine wall, and the subtle change of feeling in his fingertips meant the needle had found the sac. Sometimes he hit something else and there was a jerk—the baby trying to escape the needle. But he was just doing his job. 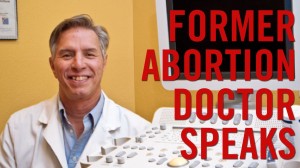 Levatino did more than 1,200 abortions in those years. It got easier with time, and the cash helped. So did the feeling that he was a hero, a knight in shining armor who made women’s problems vanish. Every woman had a story, from the teen worried her parents would throw her out of the house to the stressed-out mother who couldn’t take another child. Levatino provided the way out.

He told himself that every time—until the one time everything changed.

Dr. Anthony Levatino’s doubts began to creep in during one first trimester dilation and curettage abortion in 1978. It was about 10 a.m. He was looking for a baby in the womb so he could dismember it. The patient was lying on the table, under sedation. He had dilated her cervix—widening it to insert a suction curette with a tube attached. The suction machine was running, and to find the baby and dislodge the pieces, he was moving the curettage round and round and round the womb. His mind started to wander to a situation at home.

He and his wife Ceil, whom he had married the year before, wanted kids right away but she was unlikely ever to become pregnant. They were trying to adopt but couldn’t find a baby.

Right then it hit him: I’m throwing this baby away, he thought. I’m killing this baby. Here I am, working overtime at home looking to find a baby to adopt, and here’s this lady throwing her baby away.

He continued the procedure though, as the machine sucked the pieces into a bag. When he was done, he opened it and took inventory. Two arms? Check. Two legs? Check. He stacked up the body parts on the table. Good—it was all there. He decided his doubts were just selfishness. He needed to keep doing his job. He needed to keep being the white knight.

Soon after, in 1979, the Levatinos found a baby to adopt. Heather was only three days old when she joined the family. A month later, Ceil became pregnant with a son, Sean. A son and a daughter: the perfect family.

Levatino continued in the abortion business. In the early 1980s, dilation and evacuation (D&E) abortions became more common. They took much less time, about 15 minutes, and were less dangerous for the mother. So when asked, he agreed to be coached in the procedure. Why not? The first time he tried one, he grabbed hold of a baby’s limb with the clamp. Then he pulled. Hard. Hard enough to yank a leg off.

Abortions were the only medical procedure he did that required physical force. Over time he realized the hardest part was crushing the head. He knew he got it right when he saw white material—the baby’s brain—running out the cervix. Pulling a baby apart shocked him, but the mother was anesthetized at the time and he was just doing his job, only now more efficiently.

One beautiful day in June, 1984, five-year-old Heather was playing out in the yard with her younger brother. Levatino and his wife were entertaining guests in the house, serving cake and coffee. They told the children they could go out and play, but, “Don’t cross the street!”

But Sean did, and Heather ran across after him.

At 7:25 p.m., Levatino heard screeching brakes. He rushed outside and found Heather lying on the road unconscious. She was a mess. He couldn’t hear her breathing. He tried to resuscitate her. He tried everything he could, but she died in his arms on the way to the hospital.

Not long after, he went back to his job, got back to his routine. A couple of weeks later, he had a D&E abortion on his calendar. He got ready for the procedure, just as he had hundreds of times before.

He began by removing the laminaria—thin sticks made from seaweed that widened the cervix. Next, he reached in with the clamp. He ripped out an arm and stared at it. Oh my god, he thought. I’m killing someone’s son or daughter. He felt sick.

He wanted to stop right then. But he couldn’t. Any parts left inside the uterus could lead to infection and the woman might die. He kept ripping out pieces until they were all stacked on the table. Then, for the first time in his life, he really looked at that bloody pile.

That mess used to be someone’s son or daughter.

One day several months after Heather’s death, Levatino came home from work and found his wife, bag packed, threatening to leave him. She told him it was his fault, not anybody else’s.

“You stupid idiot,” she said. “If this is making you feel so bad, why don’t you just quit?”

He went in to work the next day and declared he was done performing second trimester abortions. He still did first trimester abortions for several more months, thinking the pain only came from killing more developed babies. His old habits didn’t die until he realized that if a baby the size of his hand was someone’s son or daughter, so was a smaller one. Doing those abortions hurt him too.

It wasn’t worth it anymore. The white knight couldn’t conquer the thought that he was killing people’s children for money. The hurt became too much. To hell with my job, he thought. And he quit doing abortions.