One Family’s Night Flight From ISIS

Now safe in Iraq, an Assyrian family recounts its escape from Islamic militants
By Mindy Belz

(WNS)–DOHUK, Iraq—In northern Iraq, taking the road up the mountains involves navigating washed out gravel and dodging a stray hail storm, as black clouds drop icy rain and pellets near Dohuk, a city of refuge for Iraqis and Syrians fleeing ISIS terrorism. Assyrian families escaping recent attacks along the Khabur River in Syria—that left up to 15 dead and nearly 200 captured—have made their way across this rough terrain to escape the violent advance of ISIS, or Islamic State.

“We were at home sleeping and we saw that Daash had come,” said Nuri, using the Arabic term for Islamic State. From his home in Tel Tamer, the father of three watched as the Islamic militants set explosives on a bridge crossing the Khabur River, then saw them exchange gunfire with police, killing at least one. Nuri’s home is on a hill, he said, giving him a good view: In the darkness and about 500 yards away, he could make out men, women, and children carried off and loaded into trucks.

Nuri didn’t wait to learn more, waking his family and herding them to a basement hideout while he gathered some of their things—money, a few valuables, and warm clothes.

As the last of the night’s darkness began to lift, the family ran from Tel Tamer, the Assyrian village where they, their parents, grandparents, and generations as far back as they know have lived. With four years of civil war and the lethal advance of Islamic State into this region, this family—like other Assyrian Christians who escaped the attack along the Khabur River—say they have no plans to go back. In this way, the Islamic State militants are using swift terrorist raids to empty this area of northern Syria of Christians. Hasaka Province is a fertile valley of farms and traditional Assyrian villages that includes some of the earliest churches in the world. 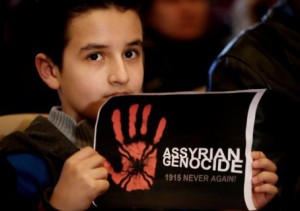 An Assyrian boy holds a poster during a sit-in for abducted Christians in Syria and Iraq, at a church in east Beirut, Lebanon. Associated Press/Photo by Hussein Malla

Nuri, his wife, and their three children—15-year-old twin boys and an 8-year-old daughter—made their way east along with others, including Nuri’s wife’s brother and his wife. They eventually caught a ride in a pickup truck to Qameshli, a Syrian city near the Iraqi border. (The family asked that their real names not be used for security reasons, and because they hope to emigrate). Since Nuri and his family have relatives living north of Dohuk, they hitched rides to get here to join them.

Nuri’s cousin, a 38-year-old mother, along with her husband and their 8-year-old daughter, all were taken by ISIS. When relatives tried to phone her, a male voice answered and told them not to phone again. They’ve heard nothing of the family since.

The fighting in the area began in early March in a string of 35 villages along the Khabur River, a tributary of the Euphrates. Tel Tamar, in the center of the area attacked, sits at a strategic crossroads with a bridge over the river—the one Nuri watched ISIS bomb—that connects this rural area of northeastern Syria with the industrial hub of Aleppo.

ISIS released 19 captives that Monday and four more on Wednesday. Assyrian church officials say they believe that leaves 264 Assyrians—including men, women, and children—still in ISIS hands. It’s unclear where they are being held or what will be done with them.

“We are optimistic they will be released,” said Archimandrite Emanuel Youkhana of the Assyrian Church of the East.

Seven of the villages along the Khabur River remain in ISIS hands today, but all 35 villages remain empty, as no forces have moved in to protect the Christian residents from ISIS. And the Islamist militants remain too close for comfort.

Traveling along the Turkey-Syria border near Hasaka Province today, I could see smoke rising from the area, and many family members who fled suspect their homes have been destroyed, their valuable belongings looted.

About 1,400 families are homeless as a result of the attack. Those who could not move in with relatives, as Nuri did, are living in the cities of Hassake and Qameshli, sleeping on church floors, in schools and hospitals. At present they are dependent on church aid for everything.

“For 15 days we have supplies and funds to help them,” said an Assyrian political officer working with the displaced (who asked not to be named for security reasons), “but after that we need support.”

In Dohuk, Nuri and his wife are relieved to be alive and free. Their children have not been in school for more than a year due to the war in Syria, but they have a place to live for now, some donated clothes, and Islamic State’s front line is more than 30 miles away.