A grieving community rallies in the face of one of the deadliest mass shootings in U.S. history

(WNS)–The city of Orlando is reeling in the aftermath of the June 12 terror attack at a gay nightclub, which left 49 people dead and 53 others wounded. Law enforcement officials removed the last of the bodies from the club overnight. At least five victims remain in grave condition at an Orlando hospital, meaning the death toll may rise.

After one of the deadliest mass shootings in U.S. history, Floridians are rallying to support the victims’ friends and families. Community members brought water and food for volunteers and local residents waited in line for five to seven hours to give blood. 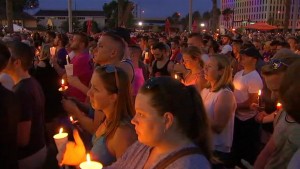 It took investigators all day Sunday to identify victims and notify next of kin. Officials ushered families into the Courtyard Hotel across from Orlando Regional Medical Center.

“The halls were packed with people,” said Caleb Spencer, a volunteer with the University of Central Florida (UCF) College Republicans. “Some people still had blood on their shirts—old ladies crying in the corner. People frantically showing up, trying to sign in.”

Churches hosted city-wide prayer vigils. Cities across the country followed suit, and vigils are planned throughout the month. Orlando Mayor Buddy Dyer spoke June 13 at a vigil at the Dr. Phillips Performing Arts Center, just a mile from the scene of the attack.

“Race, gender, sexual orientation has all been suspended because an attack on the LGBT community is an attack on the American population,” said Cade Marsh, state chairman for the College Republicans. “Everybody from every walk of life has realized that.”

The FBI is combing through the life of gunman Omar Mateen, looking for a definitive motive. Before beginning the massacre, Mateen called 911 and pledged allegiance to Islamic State. The FBI investigated him twice before but found no grounds to file criminal charges. Officials on Monday said they had found no evidence a foreign terror group directed his actions, although an ISIS website called him a member of the “caliphate” in America.

Mateen made reference to Dzhokhar and Tamerlan Tsarnaev, the Boston Marathon bombers, during his 911 call. His father, who emigrated from Afghanistan three decades ago, condemned the attack and said he didn’t know what motivated his son’s actions. But Mateen previously made two trips to Saudi Arabia to perform the umrah pilgrimage in Mecca, which is shorter than the better known hajj.