(WNS)–The majority of babies born to millennial mothers will soon be born within wedlock, according to a new forecast released this week. Research is showing that millennials, who belong to the generation born between 1980 and 2000, are more likely to value marriage before childbirth as they age.

The forecast, released in the August edition of the 2015-2017 U.S. Fertility Forecast by Demographic Intelligence, predicts the coming wave of millennial mothers will “typically have a ring on their finger and a strong expectation that a hands-on parent and partner will be in their family future,” according to the forecast summary. Demographic Intelligence is a research firm that analyzes demographic, cultural, and economic trends to forecast marriage and birthrates for private clients like Fisher-Price and Procter & Gamble.

Up until now, the majority of babies born to millennials have been outside of wedlock. But that is changing. As the generation is aging and now entering the late 20s and 30s, more college-educated women are starting to have children, and childbearing is shifting from unmarried to married mothers. 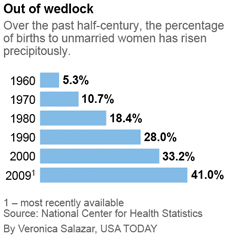 Year to year, the rate of marital childbearing is also growing. The percentage of babies born to married millennial women will increase from 49 percent in 2010 to 63 percent in 2017 and to about 77 percent by 2025, according to Demographic Intelligence projections.

“Older and better-educated, millennial women are moving toward family formation, and these women expect to enter parenthood after marriage,” said Sam Sturgeon, president of Demographic Intelligence. “That’s partly because they realize their expectations for a more egalitarian parenting arrangement are more likely to be realized if they marry before having children.”

Sturgeon says research suggests women with at least a college degree are more likely to see a child as a disruption to their education or career early on. This recent forecast picks up a new wave of women who now have their education and career settled, and would like to step into motherhood with a partner who can share the burden. Sturgeon refers to the term “success sequence,” noting it’s “easier to raise a child and maintain the middle class” if you are educated, working, and married.