Over 1,000 Church of Almighty God Members Arrested in Shandong 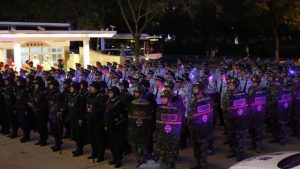 (BitterWinter) Organized operations to suppress the Church are sweeping across the province; the newest round was launched this autumn in the port city of Qingdao.

Media outlets in mainland China reported that the government of Qingdao, a major port city in the eastern province of Shandong, launched a three-month operation in September to crack down on religious activities and people petitioning the government. The drive is part of the nationwide campaign to “clean up gang crime and eliminate evil.”

Informed sources told Bitter Winter that during a secret meeting convened ahead of the operation, the authorities designated quotas for the arrest of believers from various denominations and religious movements, ranging from 100 to 200. It was also demanded to expedite the arrest of believers identified through tip-offs from residents.

The Church of Almighty God (CAG) was designated as one of the primary targets. According to the data provided by the Church, as a result of arrest operations implemented in Shandong this year, at least 1,041 of its members were arrested; 377 were detained, 118 sentenced, and over 1,170 harassed by the police. Confiscated assets amount to 2.84 million RMB (about $ 410,000).

A police officer who participated in the operation told Bitter Winter that crackdowns targeting the CAG were launched in October. The planned arrests were kept strictly confidential, so police officers from other areas were brought in to carry them out to ensure that no information was leaked. They received information on the specific targets at the latest possible moment before the operation commenced.

Caption: A ceremony was held to mark the start of the crackdown operation in Qingdao.