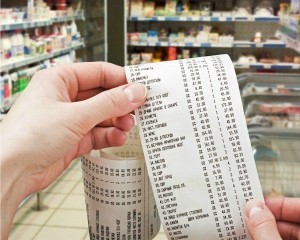 (NaturalHealth365) Many health conscious consumers do everything possible to avoid the use of food containers and plastic bottles that contain the endocrine disruptor – bisphenol, or BPA. However, often overlooked, if you accept a receipt from the cashier – while you’re shopping or dining out – you’re still being exposed to BPA.

For the study, the researchers had subjects handle store receipts for 5 minutes. They then wore gloves for 2 hours before they washed their hands. Their urine was tested both before and after the study period for levels of BPA.

BPA measurements for BPA were highest within the first 2 minutes following the experiment. However, even after a week, half of the participants showed bisphenol A in their urine. And, as an example, if you have high blood pressure – this should be a concern of yours.

By comparison, subjects that consumed a cookie containing BPA were able to clear it out much quicker. And, while they tested higher for BPA in the 5 hours following BPA consumption, it had left their bodies within 24 hours.

Handling a receipt may seem like a safe and innocuous activity – something most people do every day. However, doing so can be more harmful than using plastic water bottles or other containers that could result in the consumption of BPA.

While the study period was 5 minutes, just 5 seconds of exposure is long enough to transfer some BPA through your skin and into your bloodstream. You’ll absorb up to 10 times as much if your fingers are moist or oily.

Paper money, grocery lists and coupons stored with register receipts can take on traces of BPA and lead to more exposure.

Research has linked BPA with causing an imbalance in the body’s hormones. The endocrine disruptor can negatively impact the metabolism, immune system and the reproductive system. It can even cause cancer.

BPA is also linked with poor sperm quality, reproductive dysfunction, early puberty, thyroid problems, insulin resistance, heart disease, obesity and autoimmune diseases. It is especially toxic to developing babies in pregnant mothers due to its ability to raise the chances of a miscarriage, chromosomal errors and other genetic problems.

Endocrine disruptor exposure risk from BPA worse than we thought

Keep in mind, exposure to excessive light, heat or acidic foods can increase the release of BPA considerably.

Just about everyone handles at least one receipt throughout the course of a day. But what about cashiers, who handle hundreds of receipts each day? Their job is now a potential health hazard.

However, with BPA in so many food packaging materials, so is shopping at a grocery store. Bottom line, be careful out there in this toxic world.