(WNS)–Attacks and counterattacks are roiling the streets of Lahore, Pakistan. Suicide bombers attacked two churches in the Christian neighborhood of Youhanabad on Sunday, leaving at least 14 dead and 70 wounded. Almost immediately the Pakistani Taliban claimed responsibility, with Taliban spokesman Ahsanullah Ahsan warning reporters in an email statement: “There will be more of such attacks.”

On Monday, some Pakistanis identified as Christians responded by rioting and blockading roads, including a major highway in Lahore. Transportation services shut down as demonstrators ransacked bus terminals, smashed vehicle windows, and pelted rocks at law enforcement. Two men suspected of involvement in the church bombings were burned alive. Zaeem Qadri, spokesman for the Punjab provincial government, said it was unfortunate the mob had killed the suspects rather than handing them over to police. 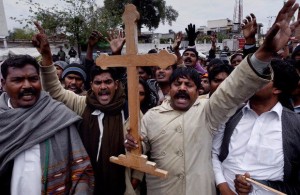 Religiously motivated violence is no stranger to Pakistan. The Taliban group behind Sunday’s attacks has been waging insurgency for more than a decade, killing thousands of Pakistanis in the process. In June, Pakistan launched a major operation to rout militants from their strongholds. Pakistan’s interior minister, Chaudhry Nisar Ali Khan, said this “inhuman act of terrorism” against Christian churches reflected the group’s “frustration” in the face of a military offensive against them.

“We have shrunk the space for them to operate,” he said.

Religious minorities also face frustration and shrunken space. Christian activist Paul Jacob told The Washington Post that Pakistani Christians “feel as if they are being pushed out of the country.”

“There is so much hate speech against minorities and flaws in the school curriculum, but nothing has been done,” Jacob added.