Palau Unites Churches at The Vets 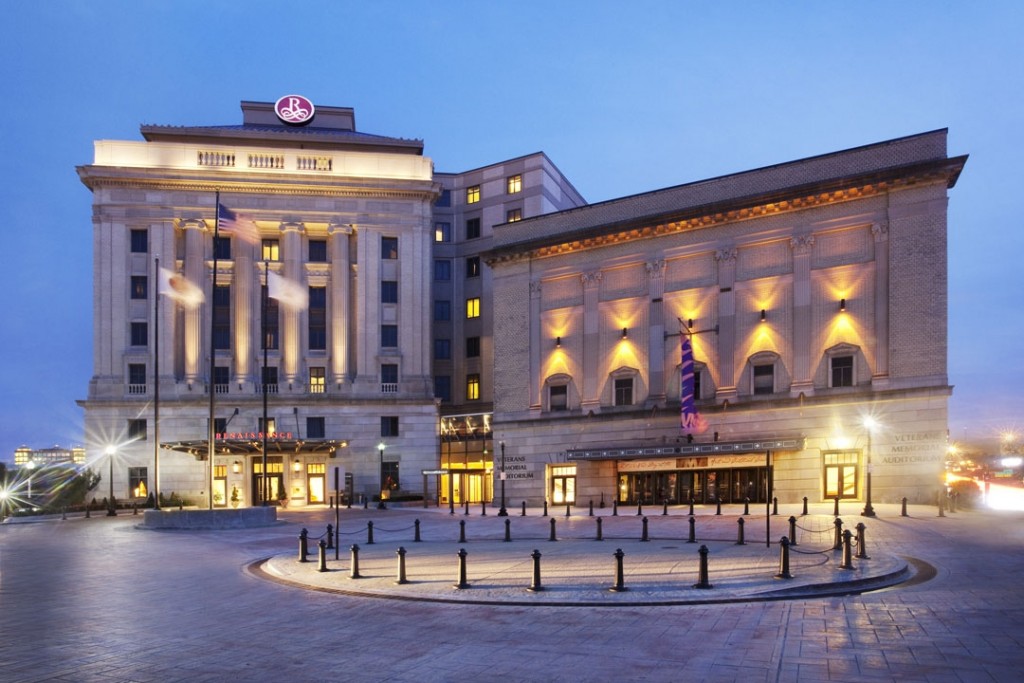 It wasn’t the first time people sang of the LORD, extolled His character and shared His Word at the VETs Memorial Auditorium in downtown Providence.

But the Oct. 21 opening to the historic two-day Together conference punctuated a departure from classical fare offered annually in December with Handel’s “Messiah” to favor modern praise-and-worship music and a prayer-packed program.

About 800 evangelicals and like-minded Christians crossed denominational, racial and socio-economic lines to fill the venue for the historic two-day Together: Advance the Gospel conference.

“We want to revive the nation, especially the Church and spread Scriptural holiness across the land,” said Luis Palau in his keynote address.

The renowned Argentinian-born evangelical and preacher traveled from Oregon to headline the event, which opened at 7 p.m., Oct. 21. And his message resonated with many.

“It’s a challenge we can’t ignore, to be united for the sake of the Gospel,” said Jim Davis, pastor of Faith and Hope Baptist Church, in Providence. “I pray that people were blessed by tonight and that, united, we will move forward.”

Ministry Training Network Executive Director Chuck Pierce agreed. “It’s a joy to see it culminate tonight,” said Pierce, also part of a group of pastors who have been praying for such an event for years. “At the same time, I think we all see it as just the beginning of a movement of Bible believers working together to advance the Gospel here in Rhode Island.” 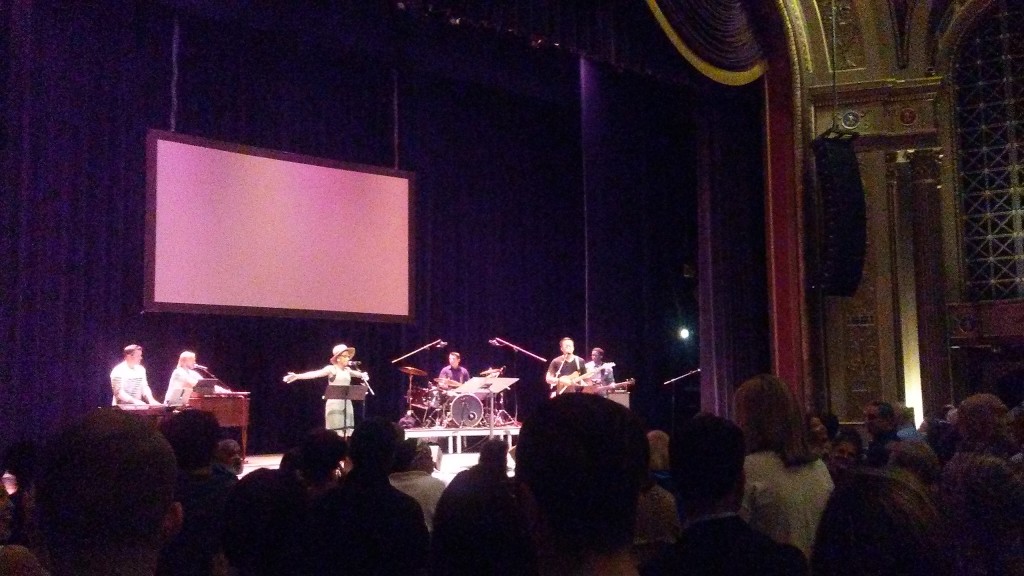 The conference opened with worship music from a band led by Jason Lee, “emblematic” of the conference. The band comprised members from several area churches and crossed ethnic, denominational and cultural lines. 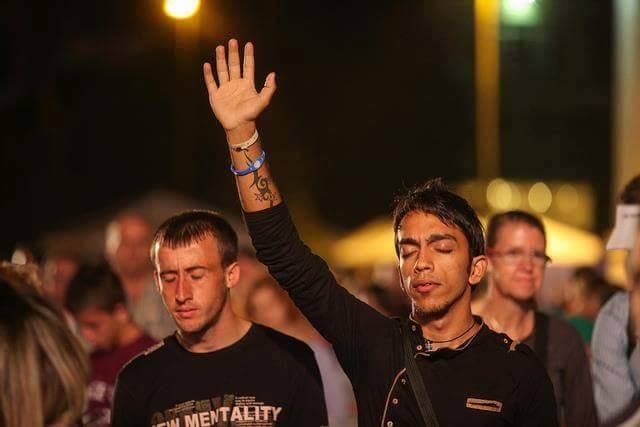 Worshipping at the Vets

“Oh, praise the name of the LORD, our God. Praise His name forevermore,” vocalists sang, the crowd joining in as they followed lyrics for that and the other selections posted on the overhead screen.

Following the opening worship sequence, Pastor David Rodriguez of Grace Fellowship, Branford CT prayed a bilingual prayer in Spanish and English: “We believe tonight is a historic night and things will happen the way You want them to happen because pastors and leaders are together,” he prayed.

Then Pastor Dave Gadoury, who was emceeing the evening, stepped behind the microphone to welcome everyone.

“We are reinvigorating the proclamation of the Gospel and the move of the Holy Spirit,” said Gadoury, Cranston Christian Fellowship’s senior pastor and one of the leaders of Love RI, the umbrella organization that spearheaded the conference after years of prayer.

He introduced Providence Mayor Jorge Alorza and invited him to the microphone, where he welcomed him with a hug. “Good evening, and buenas noches y tardes a todos,” Alorza began.

He told the crowd that when he took office in January 2015, he discovered how his predecessors and others in city government had marginalized the faith community. He sought to change that and instead of keeping the faith community at arm’s length, he has extended his hand to engage them.

“Every single Sunday, I visit a different church in the city,” he said. “Not only have I always been received with open arms, but I extend my hand to them: We have the same goals – why not work together?

“The Church not only has a seat at the table, but also a special seat at the heart of some of the most vexing issues we face today,” he stated. 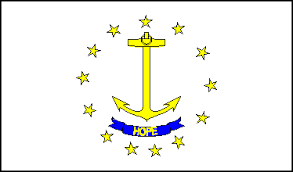 Following Alorza’s remarks, Gadoury returned to explain the history behind Together: Advance the Gospel and the vision for it going forward. “We’re not here tonight merely for an event because we’re launching a new spiritual movement,” he said.

He asked the audience to be generous with a free-will offering to be taken later in the program. A donor had pledged thousands of dollars to match every dollar given at the Oct. 21 event.

Then Pastor George Barclay took the stage and pointed everyone to Psalm 139 as he asked for “some confessional time before God, to see if anything is hindering or in the way.

“Humble hearts are the greatest mark of a mature Christian,” said Barclay, from Norwood Baptist Church and another Love RI leader. “You’ve already gone to the Cross and paid for us and will purify us from all unrighteousness,” he prayed.

Then Palau took the stage and the microphone and delivered his message, filled with profound truths yet buoyant with humorous anecdotes and light humor. “It’s beautiful to see what is happening here tonight – foreigners from Massachusetts and Connecticut,” he said. “It’s a sign of the LORD’s blessing that the Church would come together.”

Following his remarks, the worship band returned to the stage and led the crowd in another selection. At the end of it, Palau asked that they could sing the end again, only change the words from, “LORD I need You” to “LORD, I have you.” 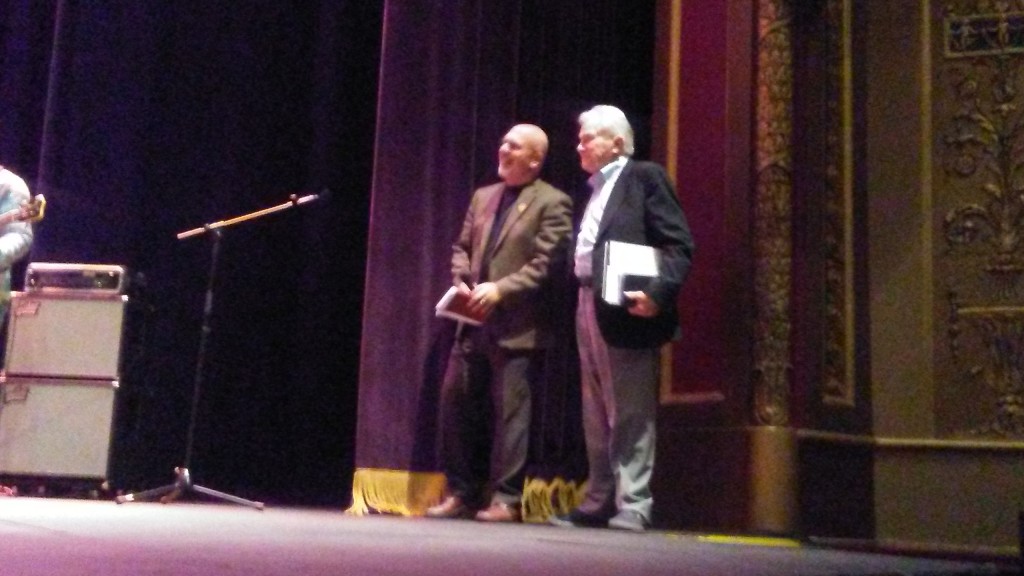 Pastor Dave Gadoury stands in the wings with Luis Palau

Leaving the stage, Palau stopped and stood next to Gadoury, near the wings, for a few minutes before descending the stairs.

Several different men and women came to the microphone with scripted prayer requests during the united responsive prayer, with intercessions including:

“LORD, hear our prayers,” the crowd responded in unison to each prayer point. They asked for unity, creativity and wisdom and to be overflowing with love in the Church for the Lost.

“We need to know Him for ourselves. God is still in control. I don’t put my confidence in an elephant or a donkey, but in the Lamb,” prayed Pastor Charles Berkley of the Providence Assembly of God accompanied by Pastor Scott Axtmann, Pastor of Renaissance Church. “Can’t nobody do me like Jesus.” 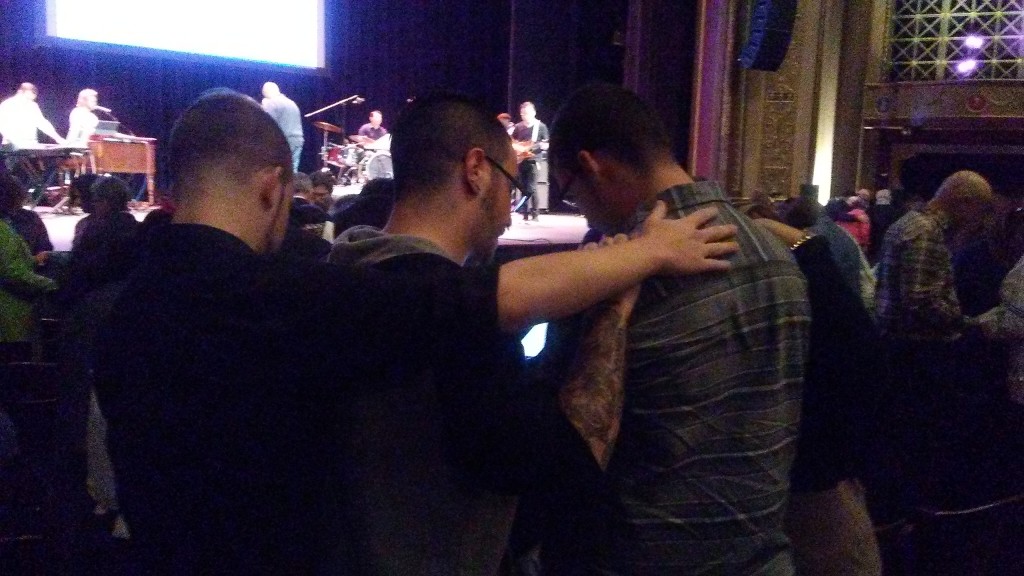 Praying in the isles at the Vets

People in the crowd huddled in the aisles and in rows of seats in small groups of two, three and four – and more – to pray their own intercessory prayers together before being dismissed for the evening.

“It was very historic in bringing the churches together in Rhode Island,” said Shaun Pillay, who with the Baptist Convention of New England traveled from Norwich, Conn., to participate in the conference and hear Palau.

“This was a great follow-up to the Decision America Tour stop that Franklin Graham did at the capitol,” he said.

Amen! Let’s all hope and pray this step toward unity will seep into the very soul of the larger body of Christ.

For as the body is one and has many members, but all the members of that one body, being many, are one body, so also is Christ.  For by one Spirit we were all baptized into one body—whether Jews or Greeks, whether slaves or free—and have all been made to drink into one Spirit.  For in fact the body is not one member but many. 1 Corinthians 12:12-14 (NKJV) 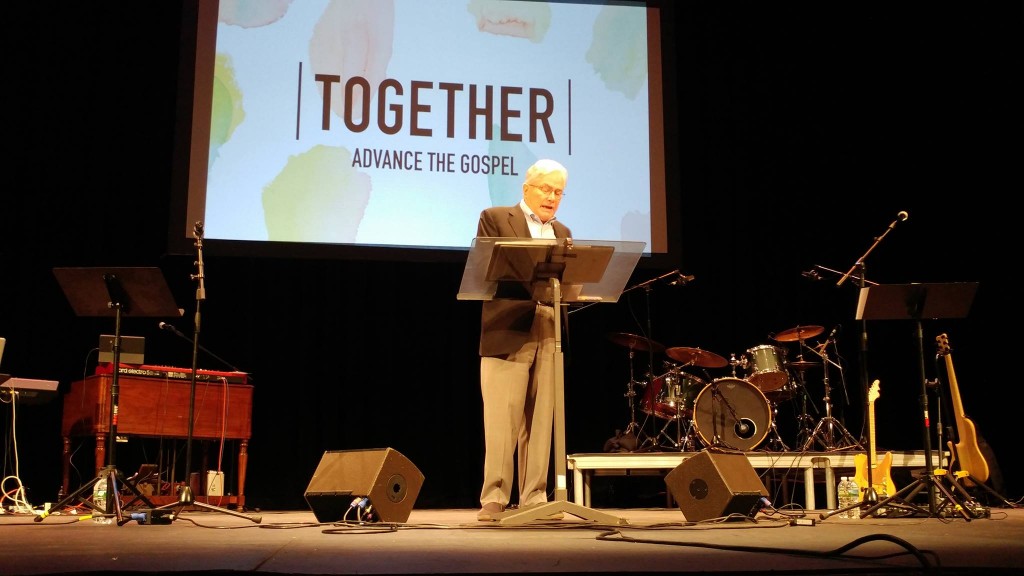 Nothing is impossible with God, Luis Palau reminded about 800 attending the Together Conference: Advance the Gospel on Oct 21st at the VETS Memorial Auditorium in Providence. “Many revivals started – not by loud impressive people but humble servants of the LORD Jesus Christ – now is the day of salvation,” the renowned evangelist and preacher said.

His message, designed as a spiritual challenge to the audience, was the keynote address in the opening night of the two-day conference. He said Christians should not feel desperate but urgent because we may not have tomorrow.

“We need to approach the throne of God with humility and brokenness,” he said. “We have entry into the throne room of God. We need to get on our knees and say, ‘I’ll meet you at the throne.’”

He noted that revival begins with holiness in the presence of God and urged those attending to search their hearts — as Pastor George Barclay had prompted the group during a prayer of heart preparation preceding Palau’s message.

Palau directed people to ask God: “Is there anything in me that is the problem in Rhode Island? LORD, use me for Your honor.”

Palau, visiting from Oregon for the Together conference, focused much of his talk on some things he took from John 14 and encouraged those in attendance to:

And a person doesn’t need to be a Peter, Paul or Mary for God to use him or her in a mighty way. “The LORD can use the humblest of people,” Palau said and shared a key example: Pete Scalzo, an Italian from Danbury, Conn.

Some years ago, Scalzo drove Palau to Promise Keepers in New York. Later, Scalzo contacted Palau and said, “How about a statewide campaign in Connecticut?”  Palau said he was skeptical, but he told Scalzo: “Go visit the pastors of the biggest churches in Connecticut.” In no time, Scalzo was calling him back to say pastors in 10 cities were on board with the plan. In Bridgeport, thousands came to know the LORD during the campaign, he said.

Next Scalzo shocked Palau when he called to ask whether Palau would be interested in preaching at West Point Military Academy.  Palau’s answer? Of course! But he also wondered how this ordinary man who repaired televisions in Danbury, Conn., could do that. It turns out a member of Scalzo’s Sunday school class years before was now the chaplain there. “Pete Scalzo — he’s a man of God,” Palau said. “He’ll also use the other Pete Scalzos of the world.”

While Palau’s message focused on profound truths to equip, encourage and inspire those listening, he also punctuated his talk with light humor – one-liners, anecdotes and quips poking fun at himself and his family, including his wife. “We have our differences with one another. They are secondary,” he said, referencing the discussion they undertook on their honeymoon of the second coming of Christ. They held different views – and apparently, still do. “You’d think after 55 years she’d see the light: I know I’m right,” he said with a chuckle.

At one point his cell phone – and several others in the audience in succeeding moments –became audible as the National Weather Service texted advisories of an imminent severe alert for flash flooding through 10 p.m.

“The LORD wants to speak, but the devil’s trying to distract us,” he said. 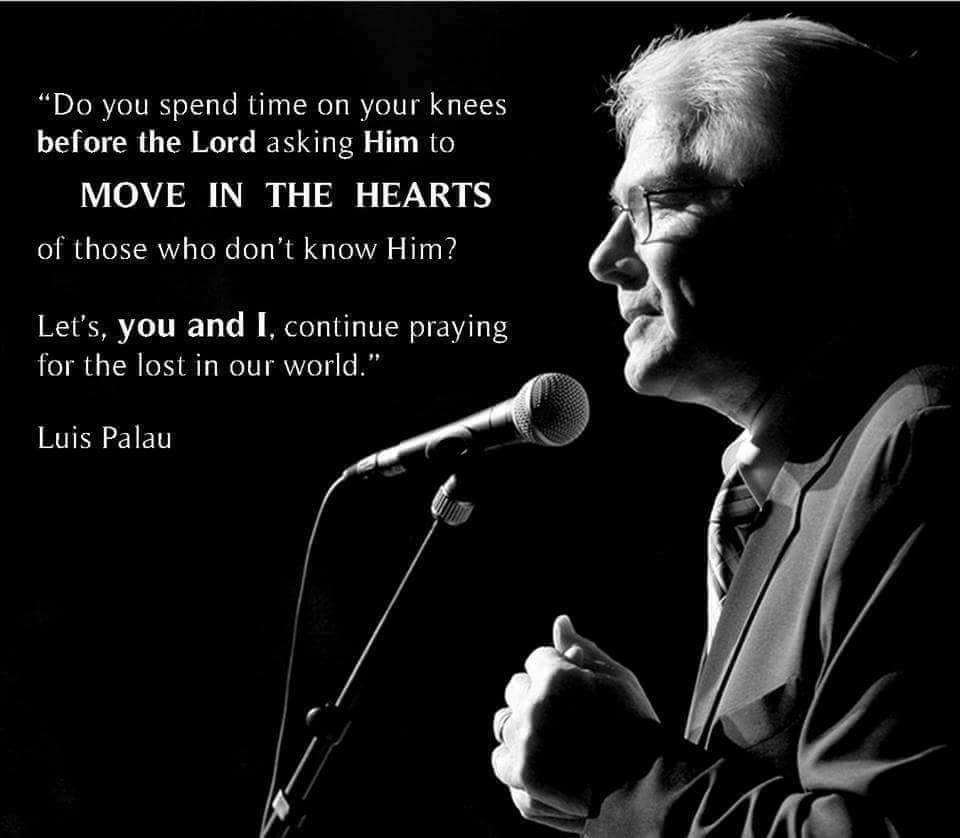 That didn’t stop the group from praying later for a flooding of a different sort – for God to pour out His Holy Spirit upon a new generation of Christians to carry the mantle of evangelism forward. They prayed for the Holy Spirit to rain down His power to equip these younger men and women – people who may worship to more modern music and dress differently from their Christian forebears, but people who love the LORD just as much. They prayed that all the men and women in the audience would preach the Gospel and the Word in season and out by the power of the Holy Spirit here and now, for such a time as this.

“Who would have thought 50 years ago this racket would be called worship?” Palau joked. “In my day, I would have a tie – these boys today wear jeans, broken jeans, torn jeans, jeans that haven’t been washed in three weeks.”

But he quickly grew serious, encouraging this new generation to pick up the mantle of evangelism. “This is the only time we’ve got: Whether it’s the best of times or the worst of times, this is the time the LORD has given you.”